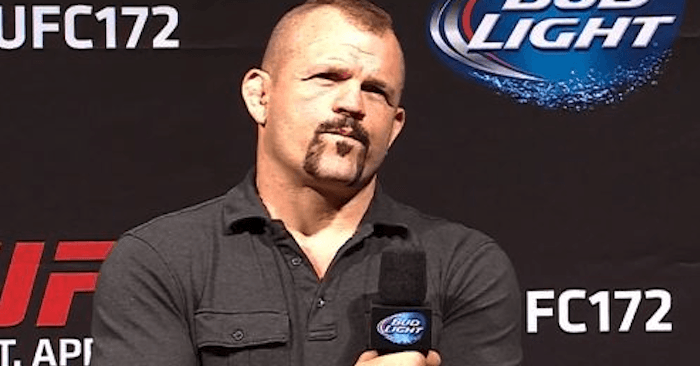 Former UFC light heavyweight champion Jon Jones is now dealing with another massive career setback after testing positive for steroids following his UFC 214 fight with Daniel Cormier. He’s already been stripped of the title and the win was officially ruled a “no contest” by the California State Athletic Commission, but Jones has maintained his innnocence from any wrong doing.

However, UFC Hall of Famer Chuck Liddell isn’t really buying any of it. He says Jones underwent a body transformation during his time away and thinks thats when all of his PED usage started. Liddell spoke to MMAfighting.com’s Ariel Helwani on Monday about Jon’s latest drug test failure.

“He’s his own worst enemy, and he was such a great fighter, I don’t know why he decided…it seemed like he decided in his offseason that one time to start using steroids, and obviously he’s got his time in court, I guess, still. I don’t know. But it seems real obvious with his increase in size and stuff. But I don’t know that he needed that, and it just seemed like he got maybe around the wrong people, got around the wrong ideas, and decided he wanted to [use steroids], and now he’s gotten caught. It’s sad.

“It looked like there was a huge change in a short period of time, that one break he took,” Liddell stated. “It seemed like he grew a lot over that time. So, I don’t know. I seem to think that’s when it started, but I don’t know. He hasn’t come out and said anything. It’s another tainted supplement, right? So I don’t know. He gets his time in court, we’ll see what happens with that too.”

“If you want to stop guys from using performance enhancing drugs, there has to be penalties when you get caught,” Liddell said, “because it’s always going to be a cat and mouse game between guys trying to catch them and guys trying to beat the tests and whatever. So you’ve got to make it cost you if you lose, if you mess up and you get caught. A progressive suspension is what you need. You need to get longer and longer the more times you get caught doing things.

Liddell would still like to see Jones back in the octagon again and does think that a four year suspension being handed down would be excessive.

“But I still, I wouldn’t want to see a four-year (suspension for Jon Jones). I still want to see him fight again.”

With that said, the former UFC light heavyweight champion is still all for the testing and stands behind a clean sport.

“I’ve said for a long time, you either have to do something like that, like the USADA thing where you’re trying to catch everybody (if they’re not) doing everything right, or just not worry about it and let guys just train and play and compete,” Liddell said. “So, what do you want to do? It’s one of those things. It’s just like the same thing when they had the exemption, so they could get the TRT exemption. I thought that was ridiculous. I was at an athletic board meeting in California and one guy said it was like getting a doctor’s note to use steroids, and I thought, ‘Well, he’s right.’

“Why are you going to give these guys exemptions and let them use steroids, if you’re not going to just let everybody do it? And, you know, it’s better for the sport if everyone’s clean. Everyone is on a fair playing field. It’s safer for athletes, it’s safer for the fighters — it’s just a safer thing for fighters. So I think the USADA thing is good.”