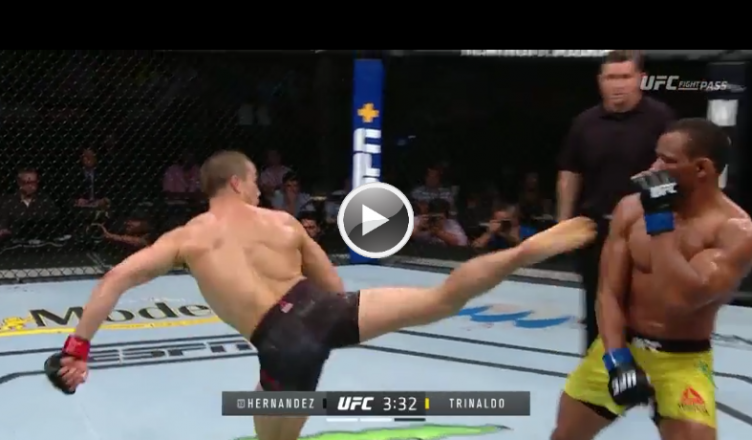 In his 3 UFC fights, Alexander Hernandez (10-2-0) has already scored 2 post-fight performance bonuses. He is coming to this Saturday, as always, guns blazing to claim another bonus against the much older and experienced Francisco Trinaldo (23-6-0).

Both fighters came inside the octagon too defensive which has resulted in a very passive fight with a lot of reading and measuring. Just at the moments, we could see the aggression of Hernandez and sharpness of Trinaldo. Hernandez took home a unanimous decision, in a fight that could go either way.

Round 1 – Hernandez takes the outside position as Trinaldo connects with the hard right hand! Fighters are feeling each other and measuring their range. Hernandez is exploding from the outside but fails to connect. Trinaldo stays patient. He is looking for the openings. Neither fighter is willing to pull the trigger. Trinaldo is trying to read the movement of Hernandez. Hernandez steps in but eats a hard right hook in return. The fight is equal. Hernandez is showing more patience in this fight. Trinaldo finally times the left hand and lands. He starts marching forward but fails to cut the movement. Hernandez goes high with the kick, Trinaldo immediately counters with the right. Both fighters are throwing a lot of faints. Trinaldo lands a low blow, the fight continues. Trinaldo lands a nice flying knee to close the opening round.

Round 2 – Hernandez comes out swinging power shots but fails to land. Trinaldo stays calm and survives an early storm. He continues with the forward pressure. Both fighters have a hard time setting up their timing. Trinaldo starts showboating; he has enough of the waiting game. Both fighters are waiting for a counter. Hernandez opens up with the kicks and goes for a body lock. Trinaldo defends the takedown and resets. Hernandez is looking to byte Trinaldo into his counter right hand. Both fighters are hesitating to offer any significant offense. They are constantly missing with their combinations. The crowd is getting frustrated. Nice right hand a body kick finally lands for Hernandez as the round ends.

Round 3 – Again, Hernandez comes out swinging but Trinaldo quickly catches him with the nice left. Hernandez continues with the lateral movement. Hernandez charges forward and initiates the clinch against the cage. After he lands a couple of nice knees, Hernandez separates. Trinaldo is looking frustrated. He goes high with the kick and loses his balance. However, Hernandez fails to capitalize and keep him on the mat. Trinaldo is controlling the center the entire fight. Both fighters stepped inside the octagon too defensive. Big kick to the body lands for Hernandez! Trinaldo starts provoking. He fires a high kick, blocked by Hernandez who explodes with the two-punch combo and lands! Both fighters are aggressive in the last minute! Hernandez has a big cut above his left eye.