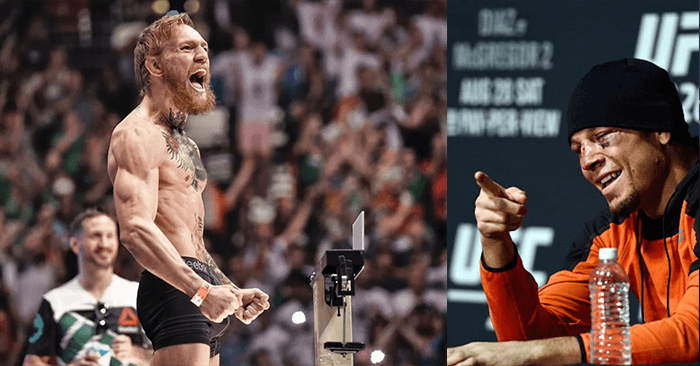 UFC lightweight champion Conor McGregor just held another one of his public arena filled interviews at the SEC Armadillo venue, in Glasgow.

While there he discussed what was next, telling Caroline Pearce he has plenty of options ahead of him.

Now the most famous active prize-fighter alive, Conor McGregor believes he can write his own ticket, even if that ticket is a rematch against Floyd Mayweather.

One thing Conor McGregor is certain of though, is that he can make Nate Diaz wait for him.

Here’s what he told Friday’s crowd:

“I’m sitting on a loss in my mind, so I’m just seeing what options are there. An option; there’s an interim belt on the line right now – that’s an option.

“Of course the Nate Diaz trilogy fight is there. Maybe one of these boxing guys…maybe Malignaggi would come over and do an MMA bout…or Floyd, maybe I could entice Floyd back.”

“We could either do a rematch in boxing, or like he said originally, we’ll do an MMA fight next. They are the options that are on the table for me right now.”

“I’m happy they’re fighting. This is what I wanted because they’re all bums at the end of the day make no mistake about that. I’m just happy they’re fighting. I just want to see them compete. Too many of them pull out right at the wire and we’re still not at this fight yet, so I’m just going to pray that this one goes ahead. Of course Nate is still there waiting, but he’ll be left waiting until we figure something out.”