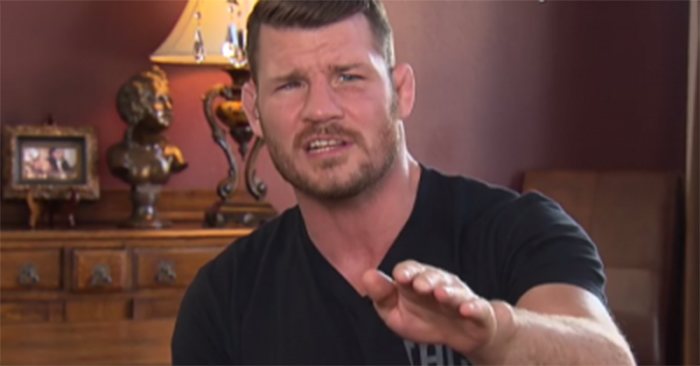 UFC champion Michael Bisping believes that his fellow UFC analyst Daniel Cormier has been way too nice to Jon Jones following his UFC 214 steroid test failure. Jones was flagged by USADA for his pre-fight drug screening and has once again been maintaining his innocence in the situation.

Cormier has taken the high road and is letting Jon and his team figure things out, but Bisping doesn’t agree with how nice he’s been about the situation, especially given all of the past issues Jones has had.

Bisping shared his thoughts on the Believe You Me Podcast.

“I like DC. DC’s a stand up guy and God bless him, maybe, well, he’s not a better human being than me. That’s what I was going to say, maybe he’s a better human being than me. No, he’s not but maybe he has more sympathy for his opponent than I do because that’s not what I would have said. If someone f**king tests positive and kicks me in the head and knocks me out and takes my belt in front of the world, I’m not going to bang on about compassion. I’m gonna say, ‘You’re a piece of s**t and you’ve got no place being in the sport.’ Especially after testing positive before and all the other things that happened.”

“The thing is, you’ve got to remember in that fight, DC was winning that fight. I thought DC won the first round and again I thought DC was winning it and then that head kick changed everything and that head kick wouldn’t have been delivered with the speed or ferocity had steroids not been involved. Now of course, like DC said, due process need to take its course but the writing on the wall is that he was on steroids and that kick wouldn’t have been as strong had steroids not been involved. Therefore, he was cheating, he knocked him out, he embarrassed him, he took his belt, he beat him up in front of the world, who knows if that’s gonna have a lasting effect on his body? So I’m sorry. Good for you Daniel Cormier but I wouldn’t say that. I’d be saying, ‘Screw this guy. Screw this guy.’

“DC doesn’t know what the lasting effects of being knocked out like that are gonna be. This isn’t a game. It isn’t a game and you don’t get knocked out and all of the sudden come back around and everything be the same again. It has a lasting effect on your brain. That substance inside your skull gets bounced around like crazy and damage is done to your brain. That’s why you see these fighters years later slurring their words, forgetting things, GSP saying he’s been abducted by aliens, because it’s real. It really happens and I would not be defending Jon Jones right now.”