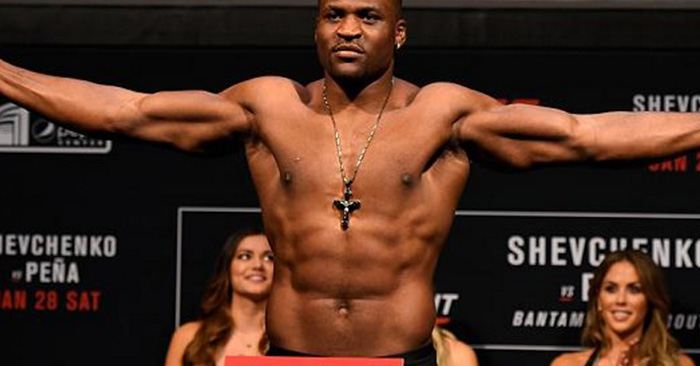 The UFC had a difficult situation on its hands last night when Derrick Lewis pulled out of UFC 216 on just hours notice. While Walt Harris was able to step up to replace Lewis, it would appear that Francis Ngannou was a possible step-in for the heavyweight fighter.

UFC 216 took place Saturday night inside the T-Mobile Arena in Las Vegas, Nev. On the night’s pay-per-view card, former champion Fabricio Werdum was set to take on Derrick Lewis. However, Lewis was forced to pull out of the event just hours before their fight due to a back injury. Thankfully, another fighter was ready to step up to the plate.

Walt Harris was initially set to face off against Mark Godbeer on the UFC 216 preliminary card, but was called up to take on Werdum when Lewis revealed he was out of commission. In an interview with MMA Junkie, rising contender Francis Ngannou revealed that he was just a phone call away from taking up the fight against Werdum before Walt Harris was given the spot.

Speaking on the situation, here is what Ngannou had to say:

“It’s a good matchup. Definitely this is a good matchup that I would never dodge it. I knew I was going to fight Alistair Overeem one day. I’ve been waiting for this fight and got ready for it since a long time ago.

“I got no answer, but I called when I saw the news. I tried to contact the matchmaker (Mick Maynard). He was busy. If I call, and he picks up, I say, ‘OK, I’m ready for him.’ … Honestly I would take the fight. I’ve been preparing for this, maybe something was going to happen between Werdum and Lewis. I’ve been preparing for this in case somebody pull out of this fight. I feel like something was going to happen. I got ready for it. … It was last minute, there was no way to change with the commissions.”