With his nonstop rude comments towards the Brazilian people, it was only a matter of time before Colby Covington received some payback.

Covington has been public enemy number one by Brazilian fighters after his disparaging comments towards the Sao Paulo crowd during his post fight victory speech over Demian Maia.

However, yesterday evening former UFC heayvweight champion Fabricio Werdum decided to finally make Covington answer for all his trash talk. Werdum and Covovington were involved in a street altercation in Australia that went viral immediately. Although some details were unclear, the boomerang that Werdum assaulted Covington with was very visible.

What’s also very apparent is that the internet isn’t on Colby’s side with any of this and they don’t support his antics. In fact, they took it a step further and decided to update Covington’s Wikipedia to reflect a TKO loss to the boomerang.

Check out the changes they made below: 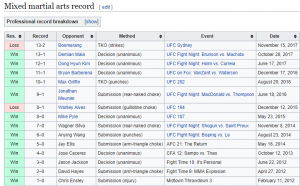