SBG Ireland head coach John Kavanagh is perhaps most famous for being coach to UFC megastar Conor McGregor. Now Kavanagh has taken to social media to vent about a recent issue he had with the Ultimate Fighting Championship (UFC).

The team head coach recently flew in to the United States ahead of International Fight Week’s exciting two nights of UFC fights on Friday and Saturday. Taking to Twitter, Kavanagh revealed that the promotion failed to pay for his flight or his hotel stay. Beyond that, the head coach was not picked up from the airport.

Check it out below:

“i guess times hard at @ufc just messaged me to say they cant collect me from airport so need to make my own way to hotel. even though i’ve a @UltimateFighter finalist and undercard guy on friday. also paid for my own flight/hotel as they only cover 1 warm up each #prayforUFC”

Shortly after the social media message began receiving attention from fight fans, Kavanagh deleted the tweet. A screen cap of the message may be seen below. 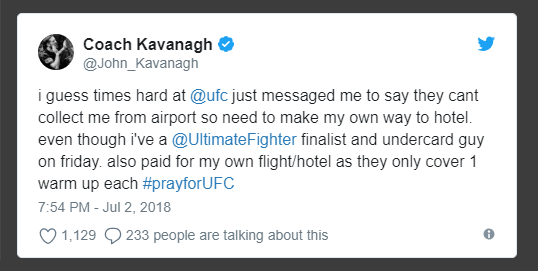