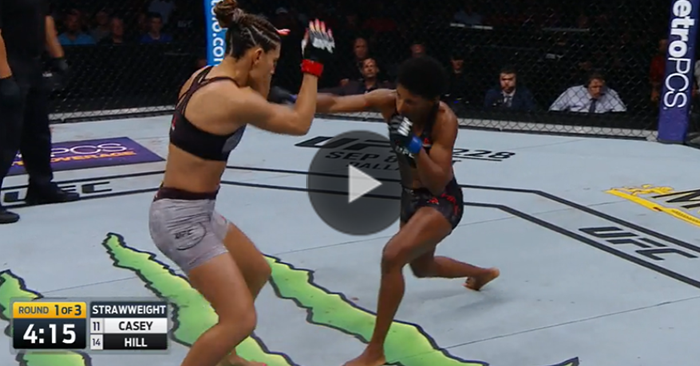 UFC women’s strawweights Angela Hill and Cortney Casey are now set to throw down inside the octagon. Now fight fans can check out the UFC results from the exciting match up.

The Ultimate Fighting Championship (UFC) is hosting the stunning fight card for UFC Fight Night 135 from within the Pinnacle Bank Arena in Lincoln, Nebraska. Fighting on the night’s live FS1 broadcast main card, Alliance MMA’s Angela Hill is taking on Cortney Casey in an octagon war for division supremacy.

Angela Hill fired out of the gate with a furry. The talented mixed martial artist began pressuring Casey with a series of intense combinations, as Casey retaliated with precise counters.

Angela Hill managed to get her opponent to the canvas, from which the fighter locked in a tight armbar attempt. However, Casey managed to break out of the submission.

The two tough competitors battled it out in the center of the octagon early in the second round, with each fighter landing some serious power shot. The second round was an intense exchange through and through, with Angela Hill seemingly getting the edge over her opponent in the stand up.

Angela Hill opened up the final round at a swift pace, as the fighter continued to push Casey with her forward pressure. The two fighters ultimately went the distance following a fifteen minute war that largely took place on the feet.

Hill landing some nice shots as the first round comes to an end! #UFCLincoln pic.twitter.com/46tABvtgy9