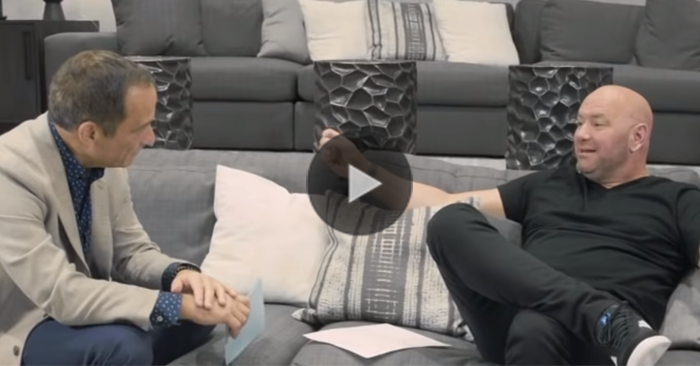 UFC President Dana White recently butted heads with news source TMZ Sports. Well, it would appear that the news source has decided to fire back.

Well, Dana White would go on to manage Ortiz’s heated rival Chuck Liddell before becoming the president of the Ultimate Fighting Championship (UFC). Ever since becoming Tito Ortiz’s boss, White and Ortiz entered a heated rivalry of their own.

The tested relationship nearly boiled over into a boxing match between the two. However, the match never came to be.

In the recently released TMZ Sports story, UFC President Dana White revealed that he believes he would have won the boxing match if it ever went down. Well, it would appear that the UFC president is not too happy that the news source reported his statement.

Tito Ortiz himself later posted a screen cap photo featuring text messages from Dana White’s phone. Within the text messages, Dana White can be seen claiming that the story is old and that it should be removed.

Ortiz and White have since made peace after years of rivalry and Ortiz has since posted the text messages from Dana White and has offered a statement over Twitter to save face.

“[email protected] please don’t tell me your fake news now. @danawhite and I are cool.”

.@TMZ please don’t tell me your fake news now. @danawhite and I are cool. pic.twitter.com/ESi2cVeZh0

Now, however, TMZ Sports has decided to publish a brand new interview featuring UFC President Dana White. Within the interview, Dana White can be seen claiming that he would have beaten Tito Ortiz in a boxing match. In the end, it would appear that the UFC president’s statement may not be as old as Dana White initially believed.