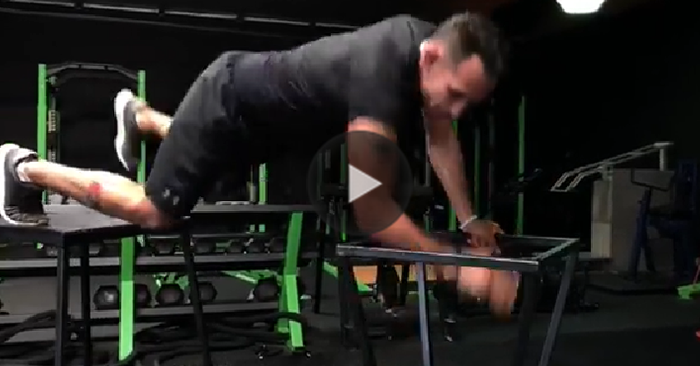 Former interim UFC lightweight champion Tony Ferguson was medically cleared to compete just days ago. That being said, it would appear that the talented mixed martial artist has since decided to try some rather dangerous looking workout techniques since then.

“El Cucuy” was initially set to face off against Khabib Nurmagomedov for the undisputed UFC lightweight title back at UFC 223. However, Ferguson tripped over a cable during a media obligation just six days before the fight.

Ferguson tore his knee from the fall and was forced to pull out of the fight against Nurmagomedov, making for the fourth time the two fighters have been forced to cancel their match up. Meanwhile, Ferguson has had surgery on his damaged knee and has been recovering from the injury.

On Saturday, Aug. 11, Tony Ferguson took to social media to reveal that he has been once again medically cleared to compete within the Ultimate Fighting Championship (UFC).

“‘Cleared’ Made That Recovery My Bitch 4 Months & A Day Thanks Everyone That Believed In Me, Keep That Shit UpTime For Some Chaos & Reclaim Whats Mine- Champ SnapJitsu™? #snapintuit”

“Cleared” Made That Recovery My Bitch 4 Months & A Day ?Thanks Everyone That Believed In Me, Keep That Shit Up?Time For Some Chaos & Reclaim Whats Mine- Champ ? ????? SnapJitsu™️ #snapintuit

Well, it would appear that Tony Ferguson is wasting no time getting his body back to peak condition. Taking to Instagram once again, “El Cucuy” has now come forward with a pair of videos featuring the fighter performing a rather dangerous looking workout that involves balancing on furniture.

Fight fans on MMA’s top internet forums have since begun voicing their concerns after seeing the videos. The intense workout can be seen within the videos provided down below.