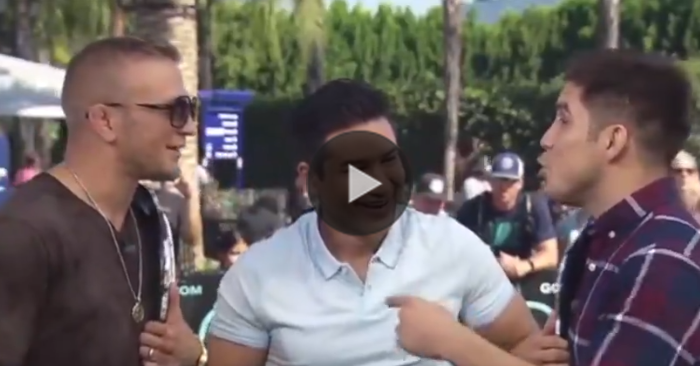 Olympic gold medalist Henry Cejudo shocked the world back at UFC 227 when the fighter defeated Demetrious Johnson for the UFC flyweight title. Now it would appear that the newly crowned title holder has met face to face with reigning UFC bantamweight champion T.J. Dillashaw for a staredown.

In his pot-fight interview, Henry Cejudo revealed that he wants the winner between Cody Garbrandt and T.J. Dillashaw from UFC 227’s main event. Dillashaw successfully defended his title from “No Love” and ultimately accepted Cejudo’s call out.

Well, Dillashaw and Cejudo were both on set for “Extra” TV in Los Angeles recently for media. Show host Mario Lopez, a longtime fan of mixed martial arts, decided to take advantage of the moment by having the two fighters square off.

Check out the staredown below.