UFC superstar Nate Diaz and lightweight contender Dustin Poirier are currently at odds over the internet. With the two mixed martial artists currently set to throw down inside the octagon, the Stockton native recently took to social media for a quick diss at his upcoming opponent.

Nate Diaz and Dustin Poirier were initially locked in to fight in the co-main event of UFC 230, as the bout was intended to be the Stockton native’s massive octagon return. The fight card will take place Nov. 3 from within the illsutrious Madison Square Garden in New York and will be available live on pay-per-view for fight fans worldwide.

While Nate Diaz is currently training and preparing for any opponent willing to face him inside the octagon come Nov. 3, things have since become somewhat unclear concerning the night’s co-headliner.

UFC 230 went without a headliner for quite some time. Tickets for the event even went on sale before a main event was chosen. Consequently, the Ultimate Fighting Championship (UFC) began targeting a title fight concerning Nate Diaz for the inaugural 165 pound world title.

After the UFC refused to permit Dustin Poirier as Nate Diaz’s main event opponent for a 165 pound world title, Diaz vs. Poirier was ultimately kept at 155 pounds for the night’s co-headliner. Diaz has since begun a campaign to get the 165 pound division in motion.

Speaking to TMZ Sports, Nate Diaz voiced his opinion on the situation.

Dedicated to spearheading the new weight class and offer a smashing headliner for UFC 230, Nate Diaz is willing to take on any opponent willing to meet him inside the octagon. That being said, Dustin Poirier has seemingly been less than interested in promoting the same campaign.

Taking to Twitter, Dustin Poirier has since come forward with a heated message for his upcoming opponent. Criticizing the Stockton native for his headstrong campaign in favor of a 165 pound division, a division many UFC fighters including the likes of Conor McGregor has voiced an interest in, Dustin Poirier offered the following statement.

“You really blew it Nate…”

You really blew it Nate…

Dustin Poirier was seemingly initially on board with the concept, but has clearly since abandoned the campaign.

“Its been a long journey but here we are. NYC 1st ever 165lb Title in the UFC! #THEREWILLBEBLOOD #THUGJITSU”

Its been a long journey but here we are. NYC 1st ever 165lb Title in the UFC! #THEREWILLBEBLOOD #THUGJITSU

Now Nate Diaz has come forward with a message of his own. While the Stockton native has since deleted the tweet, a screen cap of the post may be viewed down below. Perhaps pointing out that Poirier has been less than vocal of the UFC’s apparent interest and simultaneous resistance to implement the new weight class, the UFC superstar fired back at Poirier with a one-two punch.

“Your blowing it right now.” 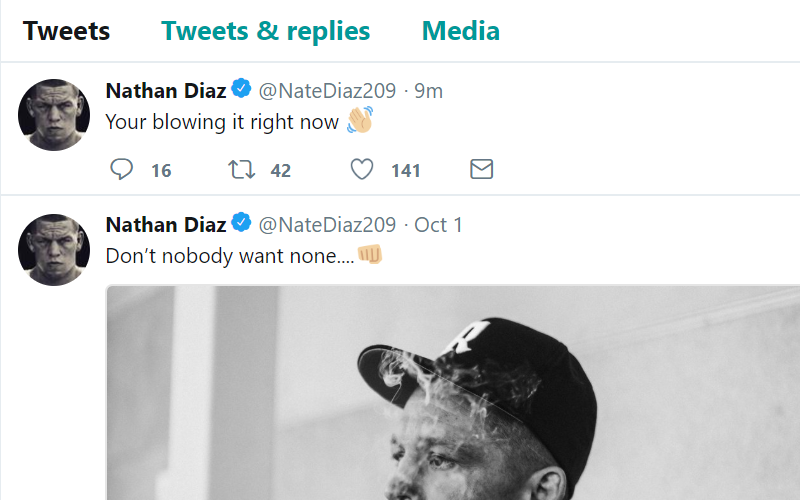 Rather than offer an explosively entertaining inaugural title fight war starring Nate Diaz — a fight many fight fans have since demanded — the UFC has reportedly chosen a fight between Valentina Shevchenko and Sijara Eubanks for the currently vacant UFC women’s flyweight title to headline UFC 230.