Claudia Gadelha (born December 7, 1988) is a Brazilian mixed martial arts (MMA) fighter who currently competes in the women’s strawweight division of the Ultimate Fighting Championship (UFC). As of October, 2017, she is #2 in the official UFC Strawweight rankings. 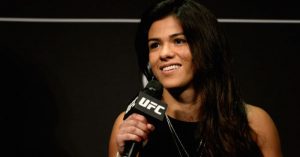 “That was when I started using drugs. I did everything, using (cocaine), smoking marijuana, sports got me out of drugs when I was 15. I wanted to start working out and doing exercises, but my mother wouldn’t let me. At first, I started working out without telling her. I remember I skipped school to go to the gym. I reeducated myself as a person, I liked to drink, to go out, and sports gave me another idea of life. I saw that if I went out the night before, I wouldn’t be able to train well the next morning.” Claudia Gadelha said when asked about how she got her start.

It would appear that UFC strawweight Claudia Gadelha has provided

Ever since the rise of Ronda Rousey, a bevy of

It would appear that another female UFC competitor is considering

Many of the Ultimate Fighting Championship’s competitors keep their fans

Ultimate Fighting Championship (UFC) competitors often like to keep their

Many UFC competitors enjoy keeping their fans up to date