Eddie Alvarez (born January 11, 1984) is an American mixed martial arts fighter who currently competes in the Ultimate Fighting Championship (UFC), and is the former UFC Lightweight Champion. Alvarez is also a former two time Bellator Lightweight Champion. He has also competed for the Japanese MMA promotion DREAM, where he made his name in their inaugural Lightweight Grand Prix and also fought once for the now defunct EliteXC promotion. 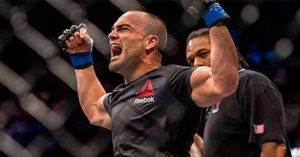 “There was that whole stigma that the guys from the smaller promotions couldn’t hang with the best guys in the UFC so I just let my surroundings and the things I was hearing affect the way I was fighting. It made me focus more on winning than on being me. I was so worried about winning and proving people wrong that I could win the UFC world title, [but] when you get focused too much on winning I don’t feel like you’re able to be your total self. I do better when I care less.”