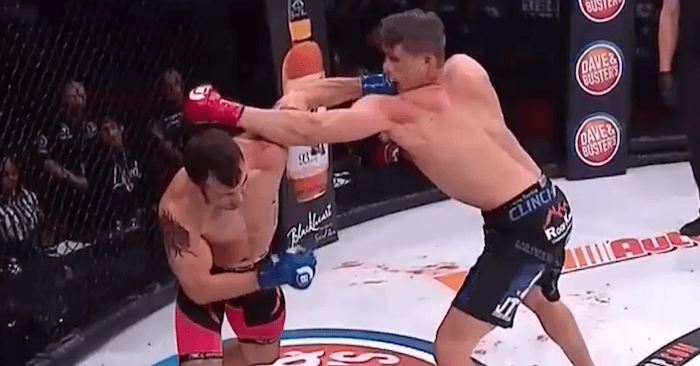 Derek Anderson and Derek Campos had the honors of kicking off the main card portion of “Bellator 170” with their lightweight bout. Anderson’s reach advantage was thought to be his biggest advantage going into this fight, but Campos did a great job at adjusting and finding his way inside early on.

Campos managed to get within range of Anderson enough to stun and wobble him with a straight left, but Anderson had the wherewithal to stay on his feet to recover. That was the most decisive strike of the opening round and while Anderson established a bit of a cross, it was Campos’ near-knockdown and aggression that likely secured him the round.

Anderson’s jab and cross really started to take a toll on the face of Campos whose face was cut and bruised up by the middle of the fight. Still, Campos was able to connect with the stiff shots within range often wobbling Anderson’s head. Anderson continued to keep Campos at bay with his kicks, keeping Campos guessing where he was going to strike next. With the opening round being razor-close, both fighters knew how important a decisive round in the third would be.

Campos tried his hardest to establish himself as the aggressor, but the fact that only his hands were threats and Anderson’s feet came into play often made it easier for Derek to push the pace and dictate where the action was going. Campos grew frustrated with the diverse strikes, tried to work for a takedown but Anderson simply shrugged him off.

Campos’ second takedown attempt was far more dangerous than the first and he landed directly in side control. Anderson was not threatened by the takedown and quickly made his way back to his feet.

A devastating shot from Anderson knocked the mouthpiece of Campos across the cage and Campos knew he had to act fast to defend. He took Anderson down to the mat and gained top control time for the final two minutes of the fight where he failed to establish any type of ground and pound. Anderson gave up his back and simply spun out, taking top control in Campos’ guard before the round expired.