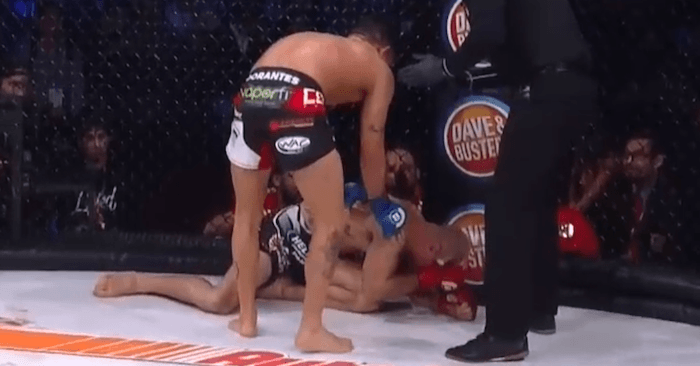 Featherweights Georgi Karakhanyan and Emmanuel Sanchez were hoping to prove to the fans packed inside The Forum that the lighter fighters had what it took to get the job done, throwing caution to the wind and completely skipping out the feeling out process.

Karakhanyan pressed Sanchez up against the fence early, working for a takedown and he stayed just busy enough to keep the referee from standing them up. Sanchez made it back to his feet but that did not stop Karakhanyan from working for the takedown, keeping the crowd nice and quiet.

Sanchez turned the tables and eventually took back control, working for a backpack rear naked choke during the last minute but time expired in the round before he could make anything of it.

Sanchez scored the early takedown in the second round and, as the bigger fighter, made some easy transitions into side control. Karakhanyan fought the entire round to make it back to his feet, all the while trying to block Sanchez’s offense.

An errant upkick caused a brief pause in action after Karakhanyan illegally kicked Sanchez’s head, but action resumed in the same position. Karakhanyan tried to fight his way up to his feet but Sanchez clobbered him with a knee to the head while he was downed. It didn’t look like it landed flush, but the doctor was brought in to look at a clearly dazed Karakhanyan. After letting the fight continue, the referee deducted a point from Sanchez for the illegal knee.

A clearly frustrated Sanchez pushed the pace once action resumed and quickly took the back of Karakhanyan; He secured positioning for a rear naked choke like in the first and Karakhanyan was able to fight the hold off until time expired again.

The tables turned in the final round when Karakhanyan was able to take the back of Sanchez and work for a choke of his own.