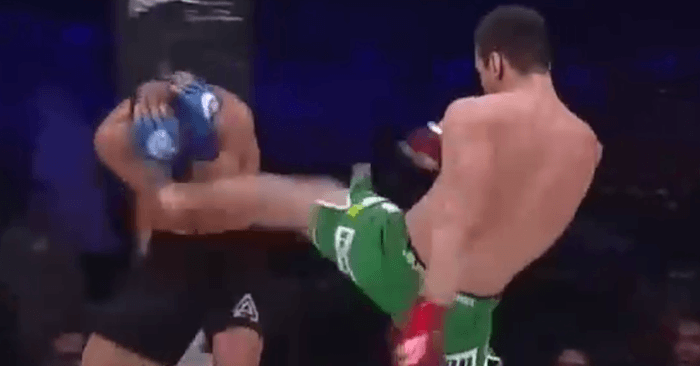 Bellator had a bit of a styles clash in the third main card fight of the night when grappler Ralek Gracie and striker Hisaki Kato went at it in The Forum. Sometimes, styles make fights. In this case, however, styles made the fight a difficult one for the fans in the arena to enjoy.

Gracie tried his best to find a comfortable distance to strike from, but the advantage clearly belonged to Kato in that category. Every time Gracie fired off a strike, Kato not only countered it with one of his own but he beat Gracie to the punch and landed first. It was immediately clear Gracie was not comfortable striking, but Kato didn’t engage quickly either and the crowd voiced their disproval of it.

The counter striker in Kato could not dish out as many strikes as he wanted due to the caution of Gracie. In the final minute, Kato decided to charge forward with a Superman Punch which barely connected. Gracie tried to lull Kato to the mat by scrambling there, but Kato would not fall for it and the round ultimately ended with neither fighter getting a decisive upperhand.

A slow (non-existent) beginning forced the referee to step in and demand both fighters pick up the aggression to which Kato responded favorably. The burst of strikes was short-lived though, and the fight dropped back down to a dull pace in the middle of the second round until it finally expired.

Even though Gracie appeared to be more aggressive in the final round, he only threw a total of one strike in the first minute of the final round. Gracie landed his best shot of the fight in the form of a right hand, but Kato simply ate it and continued to press forward. Gracie worked for a takedown along the fence which he would ultimately secure.

Gracie made his way to full mount with just forty-five seconds left in the round and Kato brilliantly fought him off for the remaining minute.