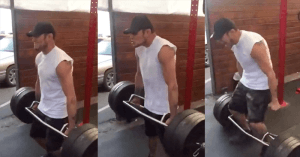 Deadlifting free weights in the open, UFC Lightweight Tony Ferguson can be seen zealously preparing for his match-up with Khabib Nurmagomedov.

The video has made its way across the web space, but has been met with negative feedback. Claims of “poor form and technique” have risen to the top of viewer discussion. If this performance is telling of Ferguson’s training regiment in its totality is yet to be seen.

Tony Ferguson is set to fight Khabib Nurmagomedov at UFC 209 on March 4, 2017 in Las Vegas, Nevada.