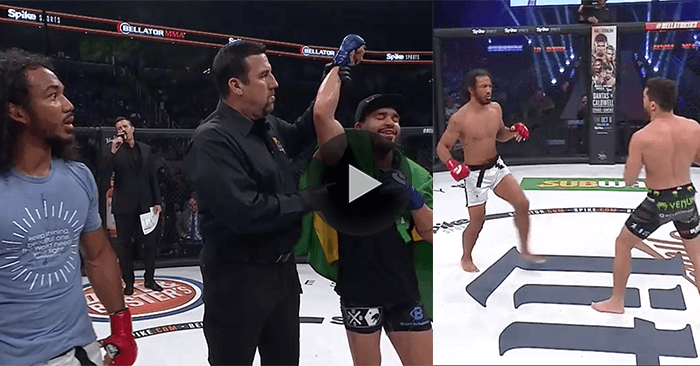 Benson Henderson was just happy to be healthy going into his fight against Patricky “Pitbull” Freire as he’s had a rough patch dealing with some injuries, mainly his ACL. The former UFC lightweight champion has fought under the Bellator MMA banner for sometime now but hasn’t enjoyed the same kind of success he’s had in the octagon.

“For me that’s been one of the toughest things, that time off,” Benson Henderson stated before his fight with Freire at Bellator 183. “Not being able to do things that I want to do, not being able to train as hard as I want to train. It’s definitely been a tough battle for me.”

“For me the thing was, I never went into a fight not feeling 100 percent,” he says. “It was more about adjusting. Something as simple as getting back up — I could get up just as fast as I did before I tore my ACL, but I had to get up differently. I had to adjust how I got up, how I did certain things, how I moved, how I reacted — but, I felt I was just as fast, just as good, just as strong even.”

Henderson knows “Pitbull” is a very dangerous fighter with a lot of weapons so he’s not concerned with how he gets the win, just as long as he comes out with his hand raised.

“This second Pitbull fight, the Pitbull brother fight, however it plays out, I’ll take a ‘W’ anyway I can get it.”

It was a slow start for the main event when the bell rang for the opening round, as both fighters came out very measured and cautious. Henderson was in the southpaw stance and Patricky in orthodox with each landing some shot during the opening frame. Tough round to score.

The second round Benson Henderson came out more urgent looking for takedowns for the entire round. He telegraphed a few attempts from the outside but eventually trapped Patricky against the fence for the duration of the round, although was unable to complete the takedown for another uneventful round. This was another difficult round and is going to make this fight very tough on the judges.

The third round saw Ben Henderson once again come out looking to put pressure on Patricky. He was throwing some hard kicks and once again looking for takedowns against the fence but was unable to keep him trapped there this time around. The round came to a close with “Pitbull” stalking Henderson down while throwing a few hard shots. A better round than the first two, but once again neither really had a clear advantage.