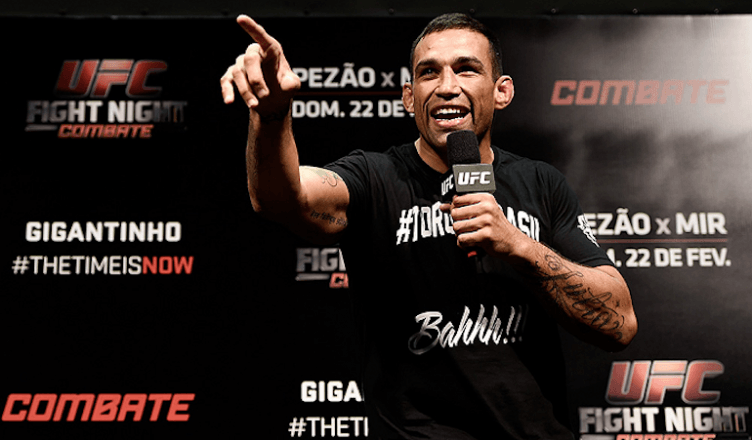 Fabricio Werdum and Tony Ferguson had to be separated while seated next to each other during the UFC 216 media lunch. Reporters were asking both of them questions about their upcoming fights, but Ferguson thought Werdum was being too loud while fielding his questions and told Werdum to keep quiet.  MMAfighting.com posted the video earlier and spoke to Werdum following the altercation.

“Hold on, I’m talking, brother,” Ferguson told Werdum. The former UFC heavyweight champ then fired back some f-bombs back at him in Portuguese.

“When I’m talking you shut your mouth,” Ferguson immediately replied.

“Shut your mouth, you f*cking f****t,” Werdum responded to Ferguson. “Don’t talk to me like that, that’s not how it works. You can talk like that to your division but with me you can’t talk like that f****t.”

Werdum says he could’ve easily taught Ferguson a lesson but kept his cool, though he was still very upset. He explained what exactly happened shortly after the incident.

“The guy told me to shut up, man,” the Brazilian said. “We’re both sitting there to do some media. Someone was asking him a question but I turned to talk to another reporter, speaking very low since we were close to each other, and he turned to me and said ‘shut your mouth’ in Spanish, ‘shut up because I’m speaking.’ I said ‘f*cking shut up? F*ck you! Don’t talk to me like that, not with me. Go talk like that to your division. You won’t talk to me like that.’ He told me to shut up out of nowhere, man.

“I know the guy. He’s not a friend, but I know the guy. He came in with all this f*cking negative energy, I went to shake his hands and he wasn’t pleasant. That’s okay, maybe he’s focused, he’s hungry, on a diet, but that’s his problem, so I stayed cool. When I went to talk to another reporter he tells me to shut up? What is this? Are you crazy? I didn’t beat him up there because something could happen and I could lose my fight. I’d break everything there. That’s why I didn’t do anything, especially in consideration to the UFC and Chris, who was coordinating everything there. F*ck, man. How can this guy come and tell me to shut up?”