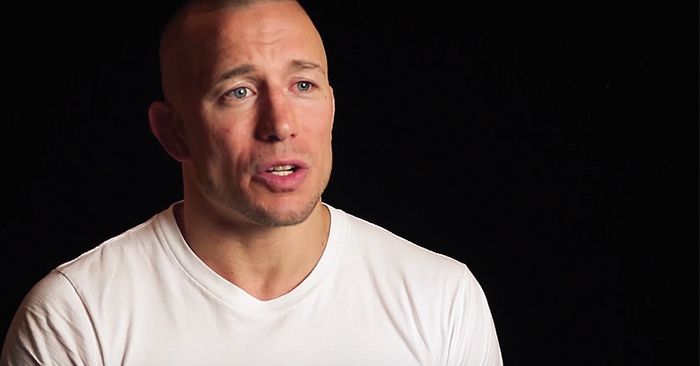 Former UFC welterweight king Georges St. Pierre is busy training for his massive return fight at UFC 217, but he’s still been paying attention to all of Michael Bisping’s trash talk. GSP has always taken the high road when it comes to the pre-fight verbal warfare, but UFC middlweight champ Michael Bisping is the polar opposite. In fact, Bisping has been calling GSP a “little b*tch” for months now amd trash talking him every chance he gets.

Listen to what the champ had to say about GSP on Sirius XM a few months ago.

“I have nothing against Georges St. Pierre apart from the fact that he retired from the sport and was like, ‘No, I can’t do it because people are taking performance enhancing drugs.’ Well guess what, they were and they’re getting caught. But if you’re a man, if you’re a fighter, if you’re not a little bitch, you’ll still continue to take those chances and try to beat those people. You won’t run away to the shadows and disappear because you think you can’t compete. I’m not the coward. I’m not the coward that needs to takes steroids to compete with these guys. And I would have thought that Georges St-Pierre was man enough also to have the same attitude.”

GSP has been trash talked by the best in the game though. He’s stood across the octagon against fighters like Nick Diaz and has never been pulled into the pre-fight hype, though he did have this to say about Bisping during an interview with Sports Illustrated.

“He’s projecting his own image,” said GSP. “For him, he wants to prove that he’s more than an easy fight and he’s got a negative view of himself. He’s got a lot of holes that he cannot fill up. He’s a very angry person deep down inside, and angry fighters make a lot of mistakes.”

“We’re not desperate. I’m happy,” said former UFC champ Georges St-Pierre. “I feel very blessed and fortunate to be in this position and it’s a moment that a few people in the world are able to live. And I’m going to live that unique moment and I will remember it for the rest of my life. But at the same time I need to put myself in the mindset that this unique moment, in order to make it in my favor as best as I can, I need to put in everything I got.”

Check out what St. Pierre had to say in it’s entirety below.

Charles Barkley is in midseason form. The NBA on TNT analyst voiced off on “poor babies” in the NBA, and we’re reacting. Plus, Georges St-Pierre and Rob Schenider join us in studio, and our fantasy executive gets you ready for Week 3 of the NFL season with some start ‘em, sit ‘em advice.Your take: Should MLB expand their productive netting to go all the way along the baselines?