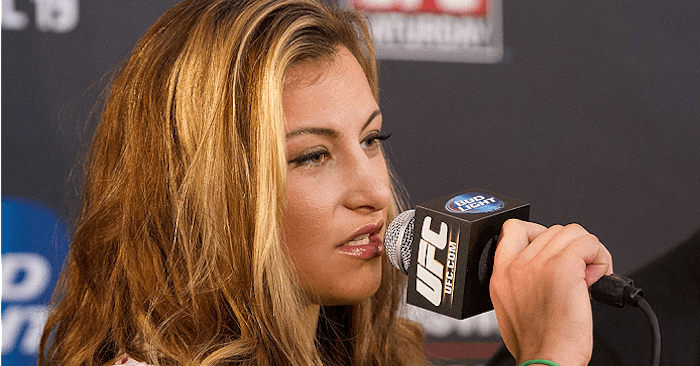 There’s certainly no love lost between former UFC champions Miesha Tate and Ronda Rousey. The two have had a heated rivalry dating back to their days in the Strikeforce promotion with Rousey having defeated her twice via armbar. Despite the two having fought twice with definitive outcomes each time, the bad blood still exists between both sides.

Earlier this week Ronda’s coach, Edmond Tarverdyan was on “The MMA Hour” and said he’d not only like to see her fight again, but would like the fight to be against Cris Cyborg.

“I don’t know,” he said. “I don’t know. We’ll live and we’ll see. If injuries weren’t there and everything was where it was, we would take that fight and I’m telling you she’s too slow for us. And Ronda will beat her. Ronda needs a challenge that she really needs to be like this person is no good and I need to prove something to the whole world. That’s how Ronda works good. And she didn’t have that with Holly, she’s the one that pushed and wanted some aggressiveness before the weigh-ins. This one she has it. She said she cheated before, she’s hurt women and she wants to come and beat her.”

Tate heard what Tarverdyan had to say and completely laughed at the idea. She believes that Ronda is finished in MMA and certainly has no business being in the octagon, especially agasint Cris Cyborg. She broke it down on her podcast earlier.

“It’s nonsense to even think about that. I can’t even believe Edmond would suggest something so asinine.”

“With that being said, we’re all at different stages of our career and life. Cyborg’s still fighting and I don’t believe Ronda will. She’s been very absent. She doesn’t even want people asking about her MMA career. You’ve got to wonder. She just got married ad everything. I don’t see her coming back.”

“It’s not really a real topic of discussion. It’s kind of like the Conor vs. GSP thing…In reality it’s not realistic.”

“If you’re looking out for your athlete, why would you do that?”