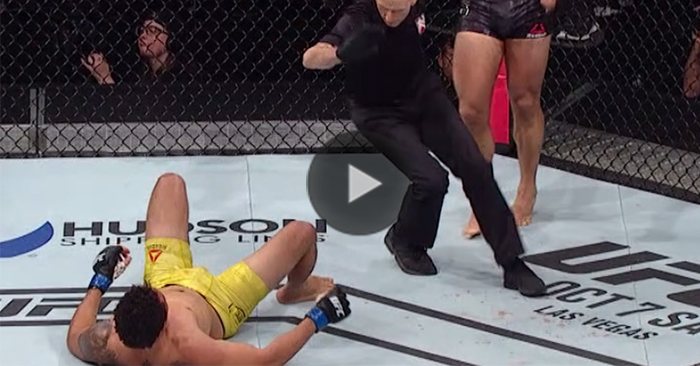 In his much anticipated UFC debut, Gokhan Saki stepped into the octagon against Henrique “Frankenstein” da Silva at UFC Japan. Prior to the fight, da Silva said he was going to walk forward and go right after Saki as he told MMAfighting earlier this week.

“I never paid too much attention to muay thai. I follow MMA more,” “Frankenstein” said. “I started to know him more after they booked the fight. I did a research, and saw that he fought in big promotions like Glory, which is cool. He has good boxing, good kicks. It’s an interesting fight, a challenge for us.”

“I’ll enter this fight as any other one,” he added. “He’s a great fighter, but I have my qualities as well. He’s a muay thai legend, but that’s muay thai. I’ve fought muay thai and MMA, and it’s two completely different worlds.”

Saki didn’t think much of his comments. In fact, he wasn’t buying any of what da Silva was selling.

“I don’t know why these people say (things like this),” Saki stated in response to da Silva.

“It makes me think that they don’t know what fighting is. I don’t understand how he can say he will beat me by KO.

“Every fight starts standing. Even if it’s on the ground or whatever, if they understand what fighting is, they would never talk like this. The people who say these things are hating on me. I don’t know a lot of other people that really think he is going to knock me out.”

Not many MMA fighters would be willing to stand and trade shots with a fighter of Gokhan Saki’s caliber and pedigree. In fact, most would take the rather obvious path and drag Saki to the ground immediately but da Silva did exactly that and came right after him. It didn’t take long for him to rethink his strategy though as Saki knocked him down with a hard shot and started to pick him apart after that.

At the end of the fight it looked like Saki was starting to become fatigued with da Silva having some success, but it was Saki’s freakish power that pulled him through once again as he landed a big shot that floored da Silva for the knockout win.

Gokhan Saki def. Henrique da Silva via KO in Round 1.