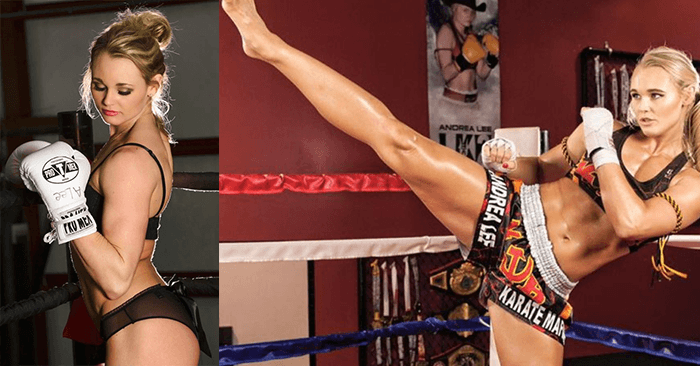 The UFC had just signed one of mixed martial arts top female fighters to fight at UFC 216, but the USADA (United States Anti-Doping Agency) rulebook just spoiled their plans. Andrea “KGB” Lee is the current LFA flyweight champion and has won her last four fights in a row, including her stoppage win last Friday night over Jamie Thornton.

With the addition of the women’s 125lb division to the current UFC weight classes on this seasons TUF, bringing Lee into the fold made perfect sense. The promotion was looking to book Lee against a very tough Kalinda Faria on next weekends UFC 216 show. However, Lee’s previous failed drug test from 2016 is going to require her to be in the USADA testing pool for six months.

According to the USADA rulebook, Lee isn’t currently eligible to fight just yet.

“A new or returning Athlete who admits or has an established and verifiable history of the Use, Attempted Use or Possession of a substance or method that is classified as prohibited at all times on the Prohibited List shall not be permitted to compete in UFC Bouts until he/she has made him/herself available for Testing for a minimum period of six months before competing. At USADA’s discretion, such Athletes may also be required to provide a minimum of two negative Samples during the minimum six-month notice period before being cleared for competition. This provision shall not apply in situations in which (i) the Athlete’s Use of the Prohibited Substance or Method was pursuant to a valid TUE or (ii) USADA subsequently grants the Athlete a TUE for the substance or method in question.”

The UFC is still looking to get a replacement to fight Faria, but no announcement has been made as of yet. UFC 216 takes place October 7th from the T-Mobile Arena in Las Vegas and is headlined by Tony Ferguson vs. Kevin Lee and Demetrious Johnson vs. Ray Borg.