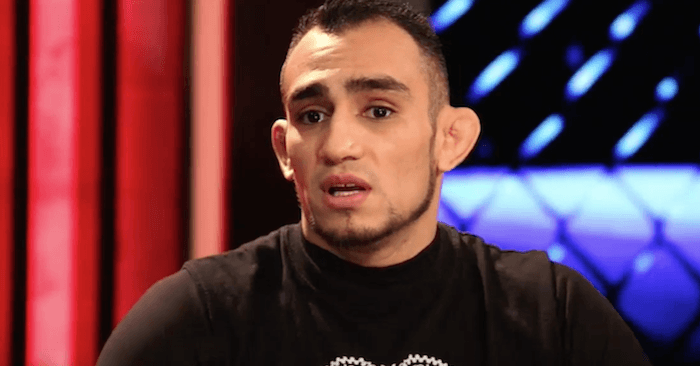 Tony Ferguson is finally getting his chance at UFC gold when he meet Kevin Lee on October 7th at UFC 216 for the interim lightweight title. Ferguson has been on a tear for quite sometime, and is currently riding a nine fight win streak as he heads into the biggest fight of his career. He’s also been calling out the biggest names in the division, including Conor McGregor and Nate Diaz. In fact, Ferguson was calling for a fight with Diaz just a few months ago.

“I might as well Stockton Slap the sh*t outta you. Really? I’m from the 805, man.” Ferguson said on an earlier edition of The MMA Hour.  “I don’t have to talk about where I’m from, but I’m tough. I’m a hell of a lot tougher than that dude, because money never made me soft. And sh*t, even if it made me soft, I wouldn’t forget where I came from. Because you know what? You’ve got a place to represent — like you said ‘represent.’ You’ve got a man right here that’s calling you out, and you’re not signing on the dotted line? You’re a clown, dude. You’re fake.”

Rumors have already been running rampant that the McGregor vs. Diaz 3 trilogy fight is what the UFC is planning, but Ferguson says the fans don’t want that fight and will be pretty angry if that’s what’s next.

“The next fight for Conor should be whoever wins this interim lightweight title,” Ferguson said during the UFC 216 media conference call “If it’s myself or Kevin Lee, that (expletive) needs to defend or vacate, and he needs to unify that belt. Anything else, as far as him trying to fight Nate, the (expletive) rankings and everything else that the UFC stands for, goes out the window, man. I mean, really? You have rankings for a reason. You have an interim belt for a reason – that’s so you can unify the thing.”

“If they want to put that fight together, that’s great,” Ferguson said. “But you know the fans will be pissed, because they obviously know that Diaz and Conor is going to make a lot of money, but the real righteous thing to do is to make sure the belts become unified. That’s what really needs to happen.”