The Ultimate Fighting Championship (UFC) is putting on another exciting night of fights tonight. This time, the mixed martial arts promotion made its way to the T-Mobile Arena in Las Vegas, Nev. for UFC 216. In one of the night’s brutal brawls, UFC’s Bobby Green and Lando Vannata entered a brutal war inside the octagon.

Lando landed a stunning shot on Green, dropping him momentarily. Taking advantage of the moment, Lando rained down strikes on his dazed opponent. After continuing their war, Lando would ultimately lose a point due to an illegal knee to the head of Green.

Following the vicious fight, Lando Vannata could be seen showing serious damage to his face. Marked with lacerations, Vannata’s face will need some serious down time before the fighter can train again.

Bobby Green vs. Lando Vannata ends in a DRAW! Can we get a rematch at UFC 217? Fight of the night perhaps? https://t.co/ZnzGtuFdQ2

OH MY WHAT AN END TO THE FIGHT!!

These guys are WEARING IT!!

Lando Vannata with the illegal knee right when the fight was there for the taking. Second chance for Bobby Green… https://t.co/N0SmI5IBCJ

Check out the full size image: 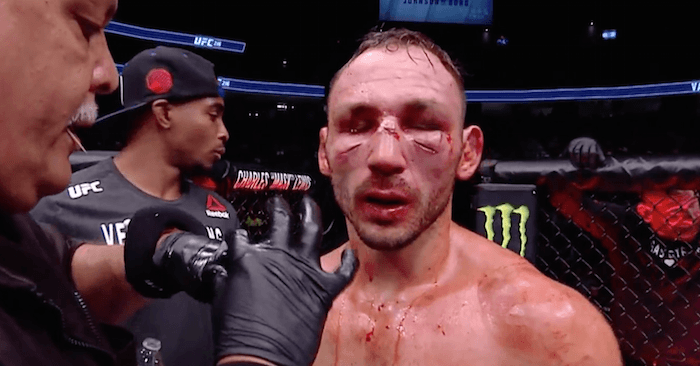