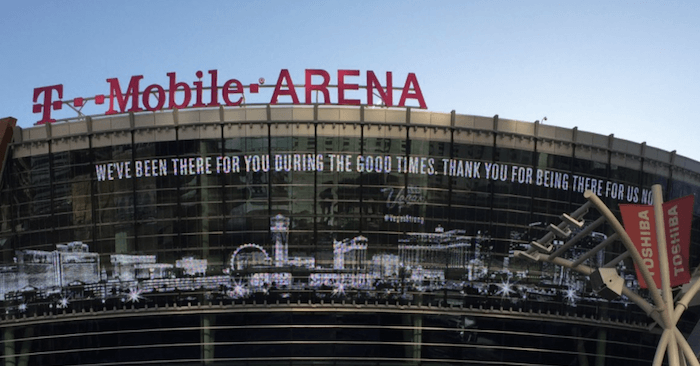 Whatever the event, in whatever state, city and venue the UFC decides to pop up at, one thing is for sure, everyone is going to know the world’s largest Mixed Martial Arts promotion is in town.

That’s because the UFC’s talented marketing team makes sure the area is canvased with posters, billboards, banners, radio ads and more. Their venues usually also play host to massive banners and posters.

This week’s events in Las Vegas changed the face of the UFC 216 fight week. The traditions of advertising for Saturday’s big pay-per-view are over, at least for the week.

In their place, the UFC and the guys at the T-Mobile arena thought it more appropriate to display words of hope in these very trying time.

Ariel Helwani brings us the photos, each one containing a different message:

Usually the marquee for the T-Mobile Arena in Las Vegas has a bunch of ads for upcoming events, but not this week. pic.twitter.com/hmpIzf2NFG

Despite Sunday’s mass-shooting, this weekend’s UFC 216 event will go on as planned.

‘UFC 216: Ferguson vs. Lee’ will go down this Saturday night from the T-Mobile arena in Las Vegas. The night’s main card airs live on pay-per-view.