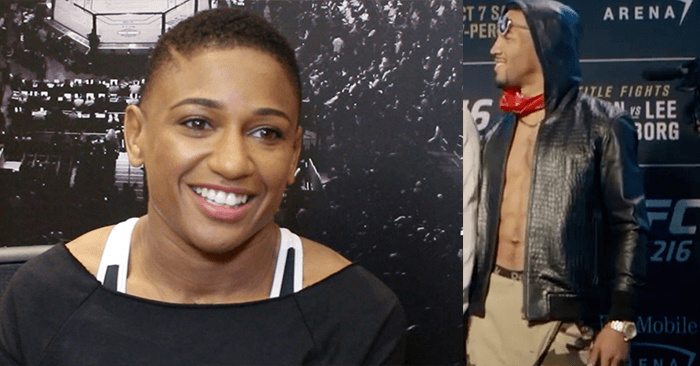 There are two guarantees when it comes to UFC 216 headliner Kevin Lee.

One is that he’s always going to dress to impress, whether he’s rocking a retro adidas jump suit, or dressed like a fashion model, Lee is always looking super-sharp everytime we see him.

The other guarantee with Lee is that he’s ready to do all the talking. Never short on words, Lee is always entertaining in front of the cameras, and never shys away from the confident and brash trash-talk fight fans have come to love.

Rarely do we see a UFC female full on throw a flirt at a male fighter, but that’s exactly what happened when Angela “Overkill” Hill saw Lee’s outfit today at the UFC 216 pre-fight media day.

Lee went viral on twitter today, as soon as he hit his pre-fight media scrum, and not for his words, but he had male reporters tweeting about his outfit.

We can’t make this up, just look:

So not only did the male reporters over at ESPN notice Lee was looking sharp, his fighting peer did as well.

He make me wanna leave the man I'm wit and start a neeeew relationship wit uuuu dis is what u dooo https://t.co/OOiPyP2Z4k

Is there a UFC romance in the works?