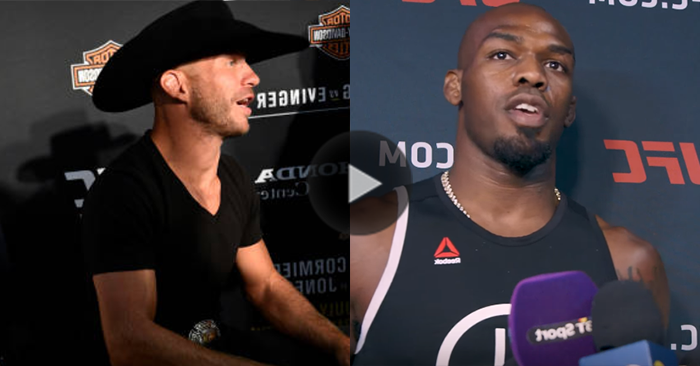 UFC veterans Donald Cerrone and Jon Jones have been teammates at Jackson-Wink MMA in Albuquerque, New Mexico for quite some time. Consequently, “Cowboy” has now decided to come forward with some interesting insight into the former UFC light heavyweight champion.

Jon Jones’ career has been shrouded in controversy. The fighter was involved in a hit-and-run, as well as a DUI arrest. Jones has failed multiple drug tests, including one for a cocaine metabolite.

Speaking on the Fighter And The Kid podcast, Donald Cerrone has now come forward with a few words on the fighter.

“I agree with you. I wish he would just be Jon.” Cerrone said. “Just let everyone know, ‘I party and go out and have a good time, but you know what? I’m still the champ.’

Donald Cerrone then described a previous near physical altercation with Jon Jones. “Cowboy” said that Jones confronted him about some things Cerrone stated about him earlier, but said that Jones “put on his God hat” and suddenly became more cordial for the nearby UFC affiliated cameras.