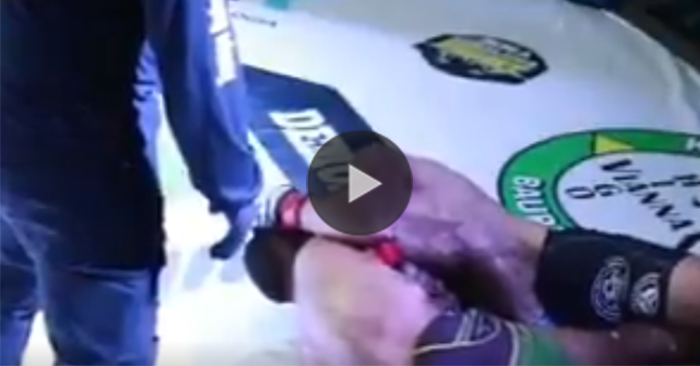 Bauru, Brazil hosted an interesting night of fights over the weekend. However, one of the night’s match ups is currently making headlines because of the third man inside the cage.

Daredevil Fight 13 went down in Bauru on Saturday, featuring a series of bouts. During one of the night’s match ups, as seen within the footage provided, a fighter in black shorts managed to lock in a guillotine submission attempt on his opponent.

The fighter secured the position and began squeezing down on the choke. The fighter’s opponent quickly stopped defending the choke and remained limp on the canvas, as the fighter in black shorts continued to choke him.

Rather than stop the fight, the referee simply stared at the unconscious fighter. After an agonizing 90 seconds, the referee finally called a stop to the contest and released the fighter in the green shorts from the submission position.

The fighter then laid on the canvas unconscious. Check it out within the video below.