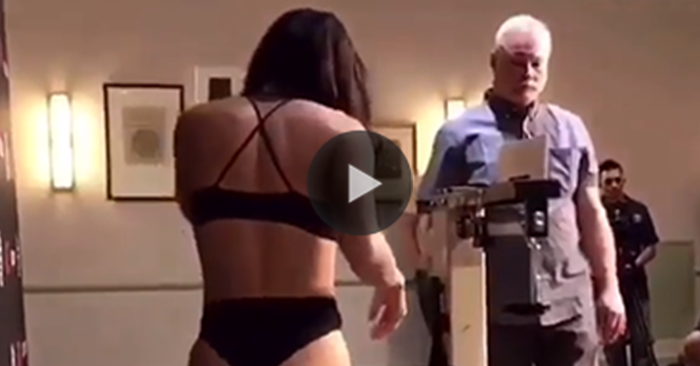 UFC women’s flyweight Rachael Ostovich has been capturing the attention of fight fans ever since her time on The Ultimate Fighter. Now a video featuring the talented mixed martial artist is making its way around the internet.

Rachael Ostovich competed on The Ultimate Fighter 26. The fighter made it to the quarterfinals of the season, but ultimately suffered a unanimous decision defeat to Barb Honchak.

Still, Ostovich has managed to land herself a UFC contract. The fighter is now coming off of a tough loss to Montana De La Rosa from The Ultimate Fighter 27 Finale event.

Now a former video of Rachael Ostovich weighing in for an octagon performance is once again surfacing and being shared all over the internet. Check it out down below.

Here is a bonus collection of some of Rachael Ostovich’s popular social media posts:

*tryin not to slip to my ???. Loving this shot by @photosbyachlene ? isn’t she just amazing!?!!!! Always making me look bomb????My body for this camp, has changed for the better. I have never seen my body this way. Crazy what consistency and hard work does!! One of these days I’m gonna post a “before” pic and y’all gonna trip. Lol?????‍♀️ I was a veddy chubby bunny carrying an extra 25 lbs of God knows what. But I’ll get into that later. Lol ????‍♀️? Anyways fight week is next week Monday and omgggg ya girl has been ready. ???☺️Feels like the days are low key dragging.. ??I’m just so excited to see my hard work come thru. ????????#TYJ Hope y’all having a great week. ? #thighs #match ?✅lol ???

I want one of these swing things in my house. ✨

Who else has no tattoos?! ??‍♀️Lol Always wanted one buuuutttt I’m too indecisive.??‍♀️ Also id probably get addicted and end up looking like @thekatvond ??✨ hmmm?! ??‍♀️ Bikini is from @forever21 #f21xme

?Imma keep it simple for ya baby. ? Bikini all summer long pretty please ?

I’m where I’m meant to be. ✨ FIRST TIME here & it was magical ? #LACMA #urbanlights #museumofarts #theeyeschico

No matter the outcome… putting everything you have into your dreams is the only victory you really need. ???? And the only true defeat is the hope you give up in yourself. ??‍♀️ #nevergiveup #keepstriving #keeppressing