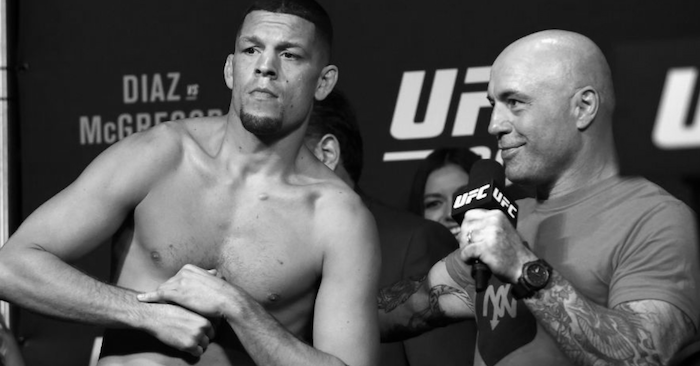 UFC superstar Nate Diaz is back. The Stockton native has not competed inside the octagon since 2016, but the talented mixed martial artist has since locked down his next big match up. With that in mind, it would appear that longtime UFC commentator Joe Rogan is sponsoring Diaz’s upcoming opponent.

Nate Diaz is locked in to fight tough UFC lightweight contender Dustin Poirier in the co-main event of UFC 230 on Nov. 3. The event will be featured live on pay-per-view and is set to take place from within the Madison Square Garden in New York.

Veteran UFC color-commentator Joe Rogan often wears many hats. Rogan is a martial artist with a black belt in Brazilian Jiu-Jitsu and Taekwondo. Rogan is a stand-up comedian, having completed several televised specials.

However, Joe Rogan is also a owner of the company Onnit. Onnit is a supplements and unconventional fitness tool provider. The business is dedicated to “Total Human Optimization.”

Rogan has landed a sponsor with several fighters through the years. Now it would appear that Dustin Poirier can be added to the list.

Taking to Instagram, Dustin Poirier recently represented his newfound sponsor. Check it out below.

“Pushed hard and learned a lot about myself last camp, thanks to @onnit for helping me power through”

Pushed hard and learned a lot about myself last camp, thanks to @onnit for helping me power through

While Dustin Poirier appears to have earned a spot among the Onnit company, Nate Diaz has yet to be sponsored by Joe Rogan.