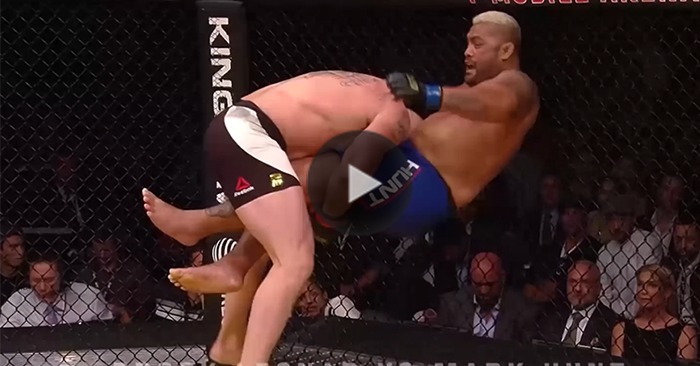 Former UFC heavyweight champion Brock Lesnar is a massive competitor. Not only is Lesnar a former title holder, making the fighter a large threat for any that cross him inside the octagon, but the former champion is also physically huge.

Lesnar is one of few heavyweights that has to actually cut weight to make the scales for his octagon performances. The fighter even requires custom sized gloves for his massive fists.

On top of all of that, Lesnar has a greatly decorated history as an amateur wrestler within the NCAA. Add all of that up and Brock Lesnar is an intimidating opponent for many.

When Brock Lesnar faced off against Mark Hunt back at UFC 200, the former UFC heavyweight champion managed to toss “The Super Samoan” through the air with a takedown from the fence.

Check out the stunning moment within the video down below.