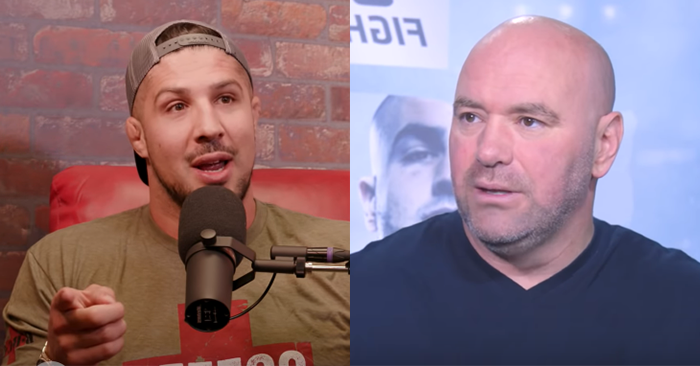 Former NFL player Greg Hardy was removed from the league’s roster after being found guilty for domestic violence. While Hardy went on to appeal the charges and ultimately had all charges dropped, the former football star has since been a character of some controversy.

Well, Greg Hardy has since made two appearances on Dana White’s Tuesday Night Contender series. Having earned a stunning finish in both performances, Hardy has been granted a development deal with the UFC.

While Hardy is not on the promotion’s roster just yet, the former NFL player is being fast tracked in a program to get his fight ready. Meanwhile, inspiring congenital amputee mixed martial artist Nick Newell put on a valiant performance in his Dana White’s Tuesday Night Contender Series debut.

The fighter ultimately suffered a decision loss to his opponent and was not awarded a UFC contract. Speaking on Below The Belt, former UFC heavyweight Brendan Schaub has since come forward with his thoughts on the UFC’s decision to promote Greg Hardy over Nick Newell.

“I just don’t understand. I don’t understand why he’s in that bulls**t Contender Series. They’re just doing it for reviews. They’re riding and dying on Greg Hardy which is hilarious. It just shows you the nature of the business and what you’re dealing with with Dana White being a promoter.

“I would bet my life on it that Nick Newell sells more tickets than Greg Hardy, especially as an established fighter who’s a congenital amputee. His story is so much better. Not to mention, you’re worried about Nick Newell. Nick Newell has, I don’t know, 20 times the amount of experience than the rest of these guys in the Contender Series. He fought at a high level, the World Series of Fighting. We can hate on the World Series of Fighting, however, Marlon Moraes, Justin Gaethje, David Branch, Anthony Johnson, Andre Arlovski – I can go through the list of high-level fighters who have competed in World Series of Fighting. To not give him an instant UFC contract is just wrong, man. It’s wrong.

“And to highlight a guy like Greg Hardy. Greg Hardy – not the person, as a person that guy, I wouldn’t piss on him if he was on fire for what he’s done to women, allegedly – however, him as a fighter, he’s an older heavyweight, has an NFL background, we’ve seen how this story works out. Trust me, we’ve seen how this story works out. He’s gonna be knocking out these lower level guys. He’s not UFC caliber. He would get beat by everyone on the current roster in the UFC. Everybody right now. But you’re gonna invest time and marketing dollars into that guy and not Nick Newell, who has fought for a world title? There’s only about four or five major leagues in mixed martial arts. World Series of Fighting is one of them. It’s produced some legit f**king champions. Marlon Moraes is a real f**king threat to T.J. Dillashaw. Lance Palmer, who is over there right now, could probably beat 98 percent of the UFC if he came over. So it’s like, to shun a guy like Nick Newell is just silly.”

“You would see the good guy have a shot. None of us are rooting for Greg Hardy. It’s a train wreck. We’re all watching in hope that he loses. It’s just not the way to do things. Take a vote online: who would you rather see get a UFC contract? Who would you rather see the marketing dollars put into, the good guy who’s an actual, legit martial artist who was born without a f**king arm and can still beat world-class fighters and has done it for several years, would you rather see him live his dream, or a guy who was an All-Pro in the NFL, was kicked out for horrible behavior, the pictures of what he did to his girlfriend at the time were so horrific you don’t even want to talk about it, intimidated the witnesses so we have no idea what really happened, was a complete f**k up in the NFL and now is over in the UFC Contender Series knocking out no-namers and we’re highlighting that. Huh?! How can you even vibe with that? How can you even support that? Just as a human being, as a normal person.

“Greg Hardy is the easy one. ‘Hey, just toss him these guys and let him knock them out. It’s a redemption story.’ You know what’s a f**king redemption story? Nick Newell with one f**king arm! Why do you think we know about guys like Jim Abbott, the pitcher? There’s more people who can root for and relate to Nick Newell than they can Greg Hardy, who had everything and f**ked it up and beat women. Most of us can’t vibe with that, most of us can’t support that. ‘Well, I believe in second chances.’ F**k your second chance. Nick Newell’s entire life has been a struggle and he’s made it. He’s never hit a woman. He doesn’t have a criminal record. Yet we watch this! Yet the UFC works with this! What the f**k are you doing?! And for what? For your Contender Series to get views?! I won’t partake in it. I do not watch it for this exact reason.”

“There’s only one person making these calls: Dana White. Same guy that s**ts on fighters. The same guy who talks shit about Francis Ngannou but then highlights Greg Hardy. What the f**k are we doing?!”