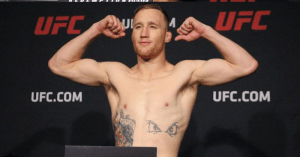 “I grew up wrestling and fighting was never something I ever dreamed about doing.” Gaethje said in an earlier interview with the UFC.

“I was never in a streetfight, and then I started fighting amateur fights in college and won seven in a row and after college I turned pro and I haven’t lost one. I just wanted to be the best at whatever I was doing, and that’s put me in this great position that I’m in right now.”

Fight fans are inside the Little Caesars Arena in Detroit,

Former UFC lightweight champion Eddie Alvarez is less than a

UFC newcomer Justin Gaethje made an impressive octagon debut when

Former UFC lightweight champion Eddie Alvarez is trying to get