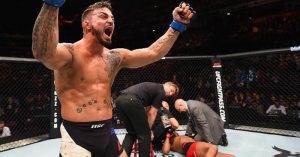 The Ultimate Fighting Championship (UFC) is now only a day

UFC welterweight Mike Perry is set to take on mixed

UFC welterweight Mike Perry is now set to co-headline the

UFC flyweight Ray Borg has pulled out of his match

UFC welterweight Mike Perry is now just days away from

UFC welterweight Mike Perry is now set to face off