Nick Diaz (born August 2, 1983) is an American professional mixed martial arts (MMA) fighter who is currently signed with the Ultimate Fighting Championship (UFC). Since beginning his fight career in 2001, Diaz has competed in the UFC, PRIDE FC, Strikeforce, EliteXC, World Extreme Cagefighting (WEC), DREAM, and Shooto. He is also a former welterweight champion in both Strikeforce and WEC, and older brother to UFC star Nate Diaz. 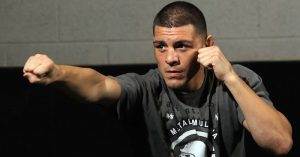 “I started training because I was having problems with some people who were bigger physically than I was. When I saw the UFC, I was impressed and wanted to some day be able to perform like those fighters.” Diaz said when asked why he chose to begin training and fighting.

UFC superstar Nate Diaz has been making headlines as of

Nick Diaz is a mixed martial arts veteran. While the

Former Strikeforce and WEC champion Nick Diaz has put on

Former WEC and Strikeforce champion Nick Diaz has put on

The “Salmon Sisters” have been getting some serious attention over

UFC superstar Nate Diaz shocked the world when he choked

Former WEC and Strikeforce champion Nick Diaz was cleared of

UFC superstar Nick Diaz has cultivated a massive following of