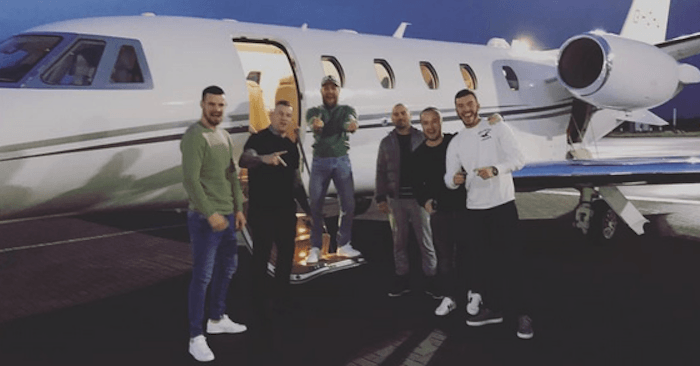 UFC Lightweight Champion (and self-proclaimed featherweight champion) Conor McGregor rose to the top of the mixed martial arts world faster than almost anybody in the sport before him. Other than a defeat at the hands of Nate Diaz, McGregor has destroyed everybody he has stepped into the octagon with to become one of the most popular fighters the sport has ever seen.

McGregor is on the verge of making history by squaring off with Floyd Mayweather in a bout that could go down in history as one of the most epic in combat sports, but he has a bit of paperwork to do before he can earn that insane payday. Still, McGregor has enough money to throw around to where he never fights again and he constantly reminds everybody of that when he brags about it in his interviews. Check out some of the most lavish expenses McGregor has made during his time as champion:

10. McGregor’s Taking Care Of His Family

As arrogant as Conor can be, he tends to take care of those who have been on the journey toward the top for as long as he has. His family has always been by his side and now they are reaping the benefits; Every single time they make an appearance at one of his fights they are dressed in amazing clothing, head to toe! It also helps that he has taken responsibility of paying every single bill to his family’s name, all the while helping them retire so young.

9. His Amazing House In Ireland

Land is not that hard to come by in the United States of America. Companies are just waiting to destroy forests in order to build the next big house, and McGregor’s McManson in Las Vegas has proven that he has a taste for style when it comes to houses. However, not many fans have seen his mansion in Ireland that’s also just as impressive. His home in Ireland cost nearly $2,000,000 for five-hundred and fifty acres of land. You could walk around the land for hours without seeing Conor. Hearing him, on the other hand…

McGregor’s car collection is second-to-none when it comes to fighters in the Ultimate Fighting Championship. Perhaps his most prized possession is his Rolls Royce Dawn which retails at $350,000.

Every time Conor steps onto the stage at a press conference, he is always wearing an extravagant new watch that will surely blind cameras if the flash and angles were right. McGregor professed his love for watches to Time Magazine when he said, “When I have won a big fight and collect a big check, I’ll purchase a beautiful watch and I’ll put it on my left hand.”

Everybody knew this would be part of the list. Much like with his watches, Conor impresses with a new suit every single time he shows up to a mainstream interview or a press conference for an upcoming fight. What kind of suit do you think he will wear if that Floyd Mayweather fight is made official?

As soon as McGregor had knocked out Jose Aldo in just thirteen seconds, he made two massive transactions for his BMW I8 and Mercades S500, dropping close to $500,000 on the vehicles.

When you’re stepping into the octagon with Nate Diaz, you can’t act like you’re training for your every day fighter. Especially when Diaz had already choked him out once before; McGregor wanted there to be no room for error when he fought Diaz at “UFC 202” in March 2016, so he spent $300,000 on his training camp going into that fight!

McGregor’s BMW I8 And Mercedes S500, and Rolls Royce Dawn are all nice luxury cars, but Conor has a taste for speed and the rest of his car collection shows just that! Don’t believe us? Take a look at this clip:

According to LowKickMMA, it was revealed in May of 2016 that McGregor had hired multiple bodyguards to keep an eye on him after getting stalked and receiving death-threats. It’s clear McGregor values his life as he paid trained bodyguards ‘Rocky’ and ‘Drago’ to follow him around 24/7 throughout the day!

Conor McGregor may no longer needs to ride around in Dana White’s private jet to get where he needs to go in a time manner as the Irish fighter recently informed soccer star Christiano Ronaldo that he is in the market for buying a private jet. If he actually follows through with this transaction, this could be the biggest purchase McGregor’s made to date.