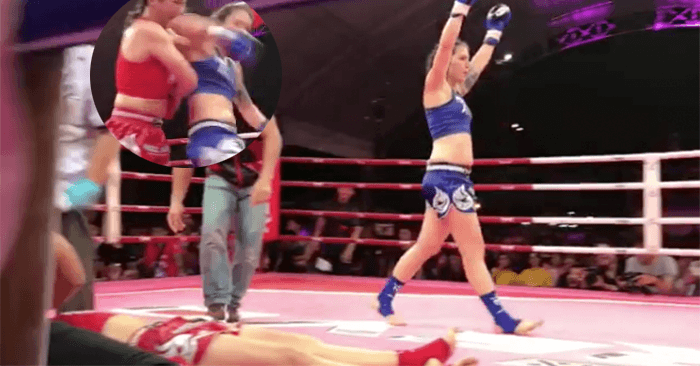 Ultimate Fighting Championship may feature the best collection of mixed martial artists around the world, but that does not mean they are exclusive to the best finishes around the world. Diehard fans may know this, but casual fans of the sport may be surprised to find out that some of the most vicious knockouts in combat sports history did not take place in an octagon or a boxing ring, but rather a Muay-Thai ring.

Natalie Morgan, better known by her nickname “Lady Kill Face”, is one of the most feared female Muay-Thai fighters in the world today. She recently stepped into the ring and introduced another fighter to her devastating elbows, knocking her clean out with a spinning attack that you can watch below:

“Just in case u didn’t see it. Here’s my KO from last night! Moving on to round two in May! ????? #muaythai #knockout #athlete #femalefighter”

Just in case u didn't see it. Here's my KO from last night! Moving on to round two in May! ????? #muaythai #knockout #athlete #femalefighter

While fighters like Kenny Florian and Lina Lansberg have been hailed for throwing some of the most vicious “hellbows” in the game, Morgan may rival them! Morgan explained her decision to transition into Muay-Thai, stating, ““I started doing Muay Thai in September of 2010 because I was getting out of shape and looking for a fun way to exercise other than the usual grind of a regular “boring” gym.”