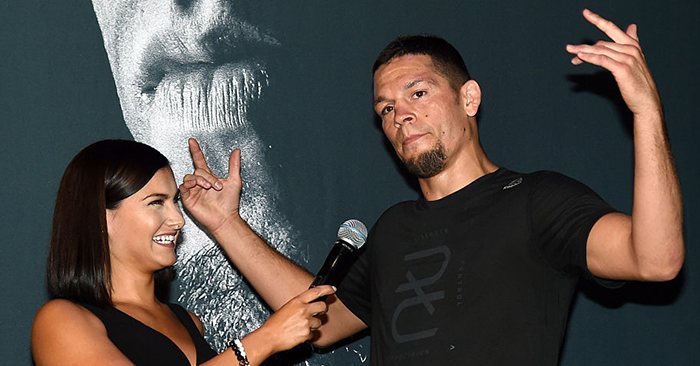 UFC mega-star Nate Diaz is reportedly requesting a $20 Million guarantee from the UFC in order to complete his trilogy with Conor McGregor.

That amount would be the largest purse guarantee for any fighter in MMA/UFC history.

For Diaz though, he knows his value after breaking the UFC pay-per-view record twice in his last two fights.

Even still, the price-tag is hefty, especially when you consider Conor will also require at a minimum the same exact amount.

In the UFC where fighters don’t get paid like boxing, trying to put together a high-dollar fight of this magnitude would be unheard of.

Taking to his special Q&A event in Germany, Conor McGregor explained that he’d rather defend his title than pursue a trilogy with Nate Diaz, thanks to Nate’s hefty price.

“Look, I’ve got the UFC title to defend and that means something to me. I will defend that world title. Nathan is there. He’s trying to come in here and make all of these demands. If he starts pricing himself out of an event, I probably will defend against the person who wins this interim belt…or someone along that line to legitimize it again. I’ve already gone from the highest of the high in terms of a money fight. Now the question I always get is about defending the belt and legitimizing the sport and the rankings. Maybe now it would be a good time for me to go and do that and shut that side up.” said Conor McGregor to the media.

“Again, we’ll see what happens in the fight (next) week. I hope they make the walk. I’ve seen it so many times where they slip on the bleedin’ soap getting out of the bath. Honestly, I feel like in the Tony and Khabib fight, they were in a game of chicken of whose going to pull out first.”

“I’ve done the money fight. I’ve done the pinnacle of a money fight – I fought for the money belt – the WBC money belt it was called. In my head now, I’m very interested in seeing this fight this weekend and to see how the lightweight title picture pans out and to go in and correct that whole situation. That’s where my thoughts are.

“I also have history with Nate. It’s 1-1 and that has to happen. It will happen. The more I spend time away from it, I think I’ve already done all of the money fights. Now, to legitimize a title and to bring it back, I could potentially bring it back. That’s a little bit exciting for me. I’ll see how this whole title picture plays out and we’ll go from there.”

Thanks for checking out this story. Have a great day!