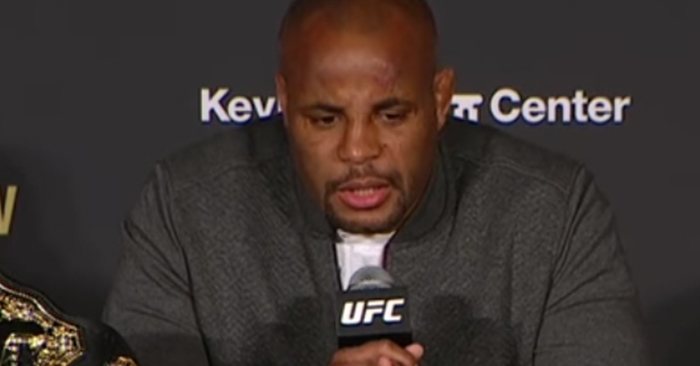 The saga of Jon Jones versus Daniel Cormier is still going strong. For years the two have been rivals both inside and outside of the octagon. Cormier and Jones have come to blows during media days, taken trash talk to very personal levels, and shared the cage for many rounds, but the latest twist has taken things even further.

This past July at UFC 214, Jon Jones returned to the UFC after being suspended following his drug test failure from the year prior. After a slow start for Jones in the opening round, he was able to catch his rhythm and finish Cormier in stunning fashion in round two. Jones was now once again the UFC light heavyweight champion and Daniel Cormier was left an emotional mess in the octagon.

If losing to Jones the first time wasn’t enough, now he’d been finished for the first time in his career by the one fighter he respected the least. However, soon after the fight it was announced that Jones had failed another drug screening, this time for steroids.  The news would only make things even more emotional for Cormier, as he told MMAfighting.com earlier.

“I was pissed off, man,” Cormier said. “I just couldn’t believe that that happened. You don’t understand me, you know? It’s like this thing, I guess it’s like a wrestling thing, you get so mad, you don’t think about the the emotion and reaction, and then you regret it later. I would have regretted throwing those away. My wife wouldn’t let me.”

“I had a fight party last week to watch Luke and ‘Canelo’ fights and I have this movie room in my house,” Cormier said. “I have a whole bunch of pictures and fight stuff and memories and stuff of my fights and all my championships. And when everyone came over, they saw my Strikeforce title, and King of the Cage, and XMMA and they were like ‘hey, where are your UFC championships?’”

“I still haven’t put those back up,” Cormier said. “I tried to throw them away but my wife wouldn’t let me. So I just put them away in my closet. I’m still not at the point now where I can take all these belts out and face them every day.”