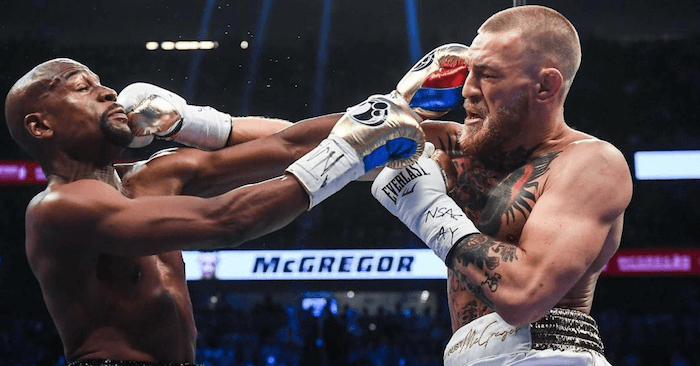 The super-fight between boxing icon Floyd Mayweather and UFC star Conor McGregor was a giant success with McGregor receiving the biggest payday of his professional career, while also having a fairly good showing against the pound for pound best boxer.  In the end, McGregor still suffered a knockout loss, but some still believe it was enough to stick around in the sport.

In fact, he had so much success in the ring back in August against Mayweather, that UFC commentator Joe Rogan believes McGregor might just stick around in boxing. Speaking on “The Joe Rogan Experience”, he explained that Conor can still have success in the boxing ring, but will need to pick his opponent wisely and not choose an opponent like Canelo or GGG.

“He’s f**king Floyd Mayweather,” said Joe Rogan. “He’s one of if not the best boxer ever and Conor did catch him with a couple things. . . They should [have a rematch]. Why not? I think Conor would have to beat somebody good in a boxing match and he would also have to have a real training camp.”

“I don’t think [Conor is done in the sport of boxing]. Look, he went the very first fight against the greatest ever and he didn’t look too bad. If there’s a legit, big fight – say if Canelo Alvarez steps up and says that he wants to fight Conor McGregor, [Conor] might do it.”

Rogan thinks that Gennady Golovkin [GGG] or Canelo Alvarez would simply be too much for Conor due to their punching power though.

“It wouldn’t be a smart move. The difference between Canelo and Floyd – Floyd was just a brilliant boxer. Canelo is a murderous puncher and he’ll f**k you up. He’ll hurt you.