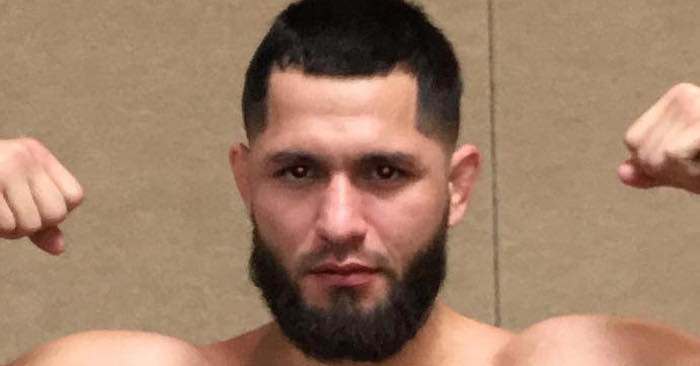 Jorge “Gamebred” Masvidal has always been talented in the cage, but during his most recent UFC run he’s making sure that everyone knows he’s coming for the top spot. For that Masvidal has come up with a few key hashtags, one of which is #Hoslapseason and he’s pretty specific with what he’s referring to.

“Gamebred” gave Submission Radio his thoughts on Bisping earlier on.

Masvidal firmly believes that Bisping stepped over the line when he ripped up the Cuban Flag.

“In my sport, there’s a lot of them. I’ll tell you one of them, that Bitchping Michael, whatever, The Count, you know, he’s a little bitch, he needs to get slapped up, man. He needs to f**king man up for this s**t that he did, you know? Ripping my country’s flag for no reason and then saying corny ass s**t like, ‘Well, the flag just happen to be there”. My ass! You put that s**t in your pocket and you probably brought it in.

“He’s such a corny dude. He does corny things like that like, like to another man that’s just finished fighting, you know, that nothing can happen. There’s more security in there than in the White House and you’re acting crazy like that? That’s not man s**t. I would respect him if he did that on the solo, like in front of Yoel or in front of me or anybody that reps that country and did things like that. I mean, he’s just a ho, man, since even before that, spitting on people’s corners. Who are you? Why would you do that? Maybe in England spitting on people is like acceptable, I don’t know, but here in America you get killed for s**t like that. You know? You don’t spit on people, especially people’s corners. So I just think that’s the No. 1 ho I gotta slap, man. And if God is with me and I get to get this title, I’m gonna break this dude’s face one way or the other. You know, I just gotta get in there and show the world what a ho he is.”

Masvidal doesn’t even want a big payday to get in the cage with Bisping, as he’d be glad to do it for the cost of a Happy Meal.

“I’m not saying that I’ll do it for free, because you never do nothing you’re good at for free, but I will fight that guy for like f**in’, I don’t know, take me to a McDonald’s and let me pig out and I’m fighting that guy. Just buy me a f**king dinner and I’ll break that guy’s face.”

“You know, that dude is a child. I’ve seen him in Vegas, the first time I’ve seen him actually in all of my life, and it was after he said all types of craziness on social media and telling me something [like], “If he ever saw me”. So I happened to be walking out of my hotel elevator and he’s getting out of a cab stumbling drunk and I see him and I just start staring at him and we were in the same line of path trajectory. He went completely the other side and just not focused on me, didn’t look at me, nothing. I look at him and I go, “Bisping, what’s up?” and I raise my hands up to see what his thought process is, what he’s thinking, and the whole UFC PR was in there and they was dying laughing because he threw up the cowabunga sign, just walked away and got in the elevator.

“Since then I knew he was a little ho. I already knew before, but that extra clarified it for me. So I’m sure he’s gonna try and get at me in New York or something but he knows who I am and I know he who is, man. He’s just gonna do craziness when the cameras are around but if it’s just me and that guy, let’s say we’re in a parking lot and he was trying to take my parking spot, it wouldn’t happen.”