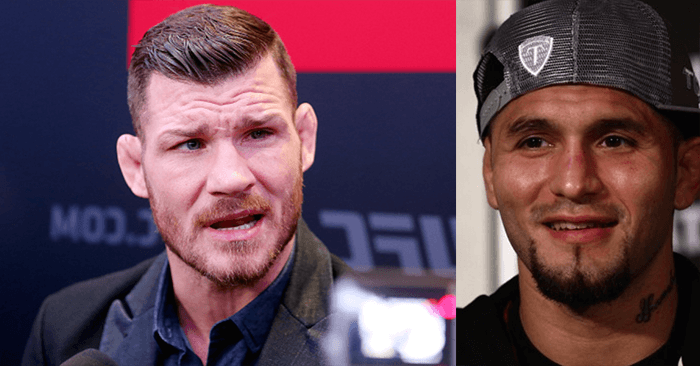 Rising UFC welterweight contender Jorge “Gamebred” Masvidal is in a league of his own when it comes to trash-talking, but the current middleweight champion Michael Bisping has some excellent trash talking skills of his own.

He sets his targets up clean, and slams them quick, below the belt insults before they even knew they were in his sights.

That’s what happened with Michael Bisping, who was recently the victim of a Masvidal onslaught.

In an interview with Submission Radio, Masvidal sounded off on the champ. Stating, “In my sport, there’s a lot of them. I’ll tell you one of them, that Bitchping Michael, whatever, The Count, you know, he’s a little bitch, he needs to get slapped up, man. He needs to f**king man up for this s**t that he did, you know? Ripping my country’s flag for no reason and then saying corny ass s**t like, ‘Well, the flag just happen to be there”. My ass! You put that s**t in your pocket and you probably brought it in.”

UFC middleweight champion Michael Bisping is also no stranger to a bit of trash-talk, and since the two of them share the main card at UFC 217, “The Count” replied with the following.

“I couldn’t care less. Get a fucking grip you fucking lunatics. Hey Masvidal you want to come slap me on sight, come give it a try you little bitch.”

“You want to come slap someone, you want to talk some shit, see how that works out for you!”

Here’s Bisping’s full rant, it’s worth the couple of minutes of your time.