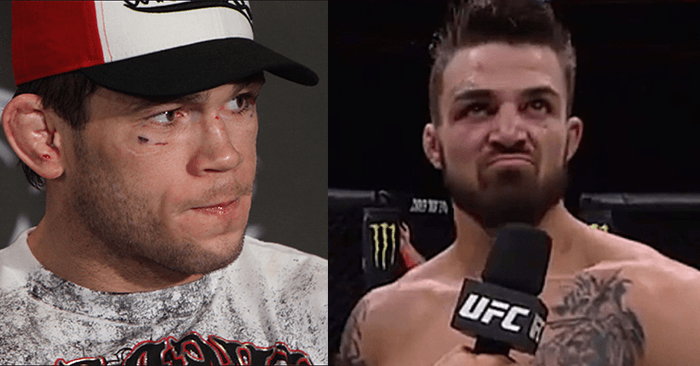 The UFC hall-of-famer is credited, along with Stephan Bonnar, for putting the UFC on the map when the promotion was struggling to gain any traction with the U.S. fanbase.

In their Ultimate Fighter season 1 finale bout, Griffin and Bonnar put on a fight of the decade worthy performance, and a lot of people tuned in mid-fight once news circulated as to what was going down on Spike T.V.

So, when the highly-respected Griffin talks, people listen.

Alves is a former UFC title challenger in his own right. He’s a fan favorite knockout artist who’s more than 12 years with the promotion has earned him a certain level of respect.

Mike Perry didn’t get that memo though, because after a few barbs back and forth, he spoke out and said he would, ‘end his life’, if they fought, even bringing his family into it.

These words rubbed Forrest Griffin the wrong way, who as stated above, injected himself into this beef that he believes just went too far.

Not sure where the line is but that’s on the wrong side of it. With all due respect

Not sure where the line is but that's on the wrong side of it. With all due respect

Thiago Alves also chimed in and responded to Griffin, while throwing another dig at Perry.

When you can’t fight you gotta talk shit. #kids

When you can’t fight you gotta talk shit. #kids https://t.co/Apti4IwsJl

Thanks for checking us out. Have a great day!