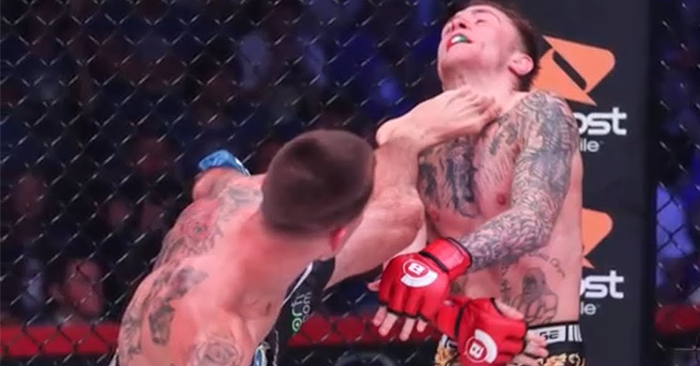 Mixed martial arts promotion Bellator MMA hosted a stunning night of fights on Friday. Now fighters are taking to the internet to voice their thoughts on one of the night’s most stunning finishes.

Bellator 204 went down on Aug. 17 from within the Sanford Pentagon in Sioux Falls, South Dakota. Featured on the night’s main card, SBG Ireland’s James Gallagher went toe-to-toe with Ricky Bandejas.

Of course, the fight did not last long. Bandejas managed to make short work of UFC megastar Conor McGregor’s teammate by knocking out Gallagher within the first round.

Highlights of the stunning finish have since gone viral. Now fighters are taking to social media to offer their thoughts on the massive finish. Check out what many had to say within the Twitter posts below.

Irish guy about to get a little wake up call?

Yessss that fake ass Conor McGregor gets humbled, love seeing that after his Cocky antics

Damn! Bandejas weathered a tough early storm and gets the huge win! #Bellator204

Ricky Bandejas cashes for me. Now if Storley finishes it will be a great night!

And that’s why @StrabanimalMMA ducked me. #Bellator204

The chicken was exposed #Bellator204 #foxsport

LOL at Gallagher. I’d knock him out in the first exchange. #Bellator204

Everybody talking about Gallagher this Gallagher that!! Yall better quit disrespecting our team, cuz we coming for all the straps!!! Pretty @rickybandejas for the FINISH!! #ncmma #westraphuntingbaby #cuffingseason #Bellator204