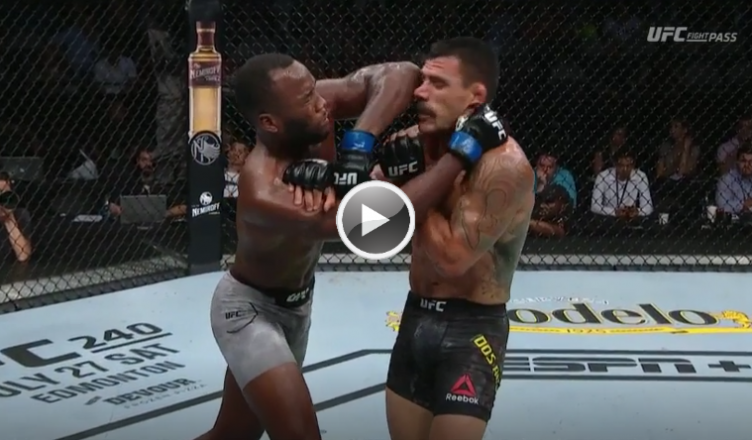 AT&T Center will be a home of the fighting world once again and if we believe the rumors, it will give us yet another Welterweight contender. In the main event of the evening, a veteran of the octagon and the former UFC Lightweight champion, Rafael Dos Anjos (29-11-0) will be looking to smash the hype train of the rising British kickboxer, Leon Edwards.

Edwards has shown his composure and maturity from the beginning of the fight. He was leading the dance throughout the 5 rounds and his footwork and distance work were a mystery for the confused Dos Anjos.

Round 1 – Edwards takes the center. Both fighters are measuring their range. Edwards quickly lets his hands go but fails to find a target. He times the double leg perfectly and scores an early takedown. Dos Anjos is working his way up but Edwards is displaying strong top control. Edwards is in the half guard position. Dos Anjos is controlling the posture. Edwards is passive from the top position, he is tiring Dos Anjos out. Dos Anjos scrambles and Edwards quickly takes his back! Dos Anjos stands and separates. He resets and starts landing kicks and punches but Edwards stays calm and counters with a couple of jabs. Dos Anjos misses with the power uppercut and finds himself in the clinch once again as the round ends.

Round 2 – Hard leg kick lands for Edwards! He follows with a couple of power shots and a nice right-hand finds home! Dos Anjos clearly has a problem with the range disadvantage. Edwards dives for a single leg but Dos Anjos stuffs this one. They are back in the clinch as Dos Anjos separates shortly after. Edwards connects with a nice left hand. He is very accurate. Now Dos Anjos goes for a single leg but Edwards defends. Big elbow lands for Edwards! His Muay Thai is perfect so far! Big leg kick drops Edwards! Dos Anjos takes the half guard.  He starts working the body of Edwards. Edwards works his way back to his feet and starts working behind his jab.  Dos Anjos is already busted up!

Round 3 – Edwards continues with the pressure. Dos Anjos opens the round with a stiff right hand. Neither fighter is willing to pull the trigger. Dos Anjos level changes and grabs the single leg, defended by Edwards. Edwards is very sharp, he is destroying Dos Anjos from the distance. Dos Anjos eats another elbow! He is looking desperate. Edwards is using his range perfectly. He stuffs another takedown and they are back in the clinch. The referee separates the fighters. Big uppercut lands for Edwards! He is very tactical so far. They are back in the clinch and Edwards separates as the round ends.

Round 4 – Edwards is switching his stances early. He continues to use his range perfectly and landing big combos. Dos Anjos Establishes forward pressure and lands a big kick to the body! Dos Anjos has a hard time closing the distance. Edwards is picking his shots well. Dos Anjos has a mystery to solve in front of him. They are in the boxing range but Edwards is always winning the exchanges. Dos Anjos is all bloody as he eats another hard elbow! Dos Anjos wakes up and lands a nice right hand! Flying knee attempt from Dos Anjos but Edwards puts him on his back and starts controlling the top. Dos Anjos forces his way up and they are back in the clinch.

Round 5 – Dos Anjos with the pressure. Edwards is moving on the outside. Dos Anjos is loading on the punches, he knows that he is behind. He initiates the clinch but Edwards reverses. He is showing great composure as he continues leading the dance. Dos Anjos pushes with the right hand but Edwards is always responding with the clinch. They are back in the center and Dos Anjos starts walking Edwards down. Edwards is escaping all dangers with his great footwork. Nice left-hand lands for Dos Anjos, he starts letting his hands go! Edwards spots the danger on the feet and shoots for a double leg. Dos Anjos is defending well. Big elbow on the separation lands for Edwards who scores another takedown in the last seconds of the round.