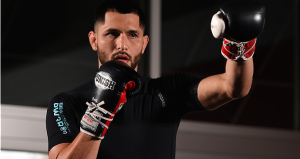 Stephen Thompson and Jorge Masvidal are each looking to climb

Even though they don’t fight in the same weight class,

Jorge Masvidal is the type of fighter fans should love

UFC welterweight Colby Covington has drawn the ire of many

UFC middleweight champion Michael Bisping caused some controversy when he

The bad blood between UFC middleweight champion Michael Bisping and

It would appear that another talented UFC competitor now has

Rising UFC welterweight contender Jorge “Gamebred” Masvidal is in a

Jorge “Gamebred” Masvidal has always been talented in the cage,