Ronda Rousey (born February 1, 1987) is an American mixed martial artist, judo practitioner, and Hollywood actress. Rousey was the first American woman to earn an Olympic medal (bronze) in judo, which she won at the 2008 Summer Olympics in Beijing, China. She is also the former UFC Women’s Bantamweight Champion, as well as the final Strikeforce Women’s Bantamweight Champion. 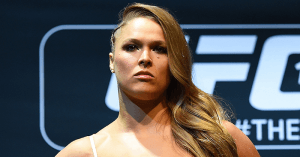 “I just want to send a big ‘thank you’ to everyone at Zuffa and Strikeforce that have gone out of their way to keep the women’s divisions going. I was so happy that they’re keeping both women’s divisions around for at least a while. I just want to say thank you to them for keeping us around. That’s what I’ve been trying to do from the very beginning – try and bring enough attention so they see that we can make good money and people do want to watch us. I’m glad to see that everyone is starting to come around.” Ronda Rousey told MMAjunkie just before she rose to superstar status.