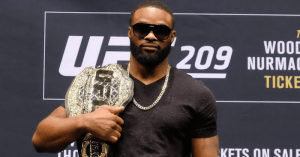 Former ONE welterweight champion Ben Askren has officially been traded

Former ONE welterweight champion Ben Askren is now signed with

Former WWE superstar CM Punk has gone 0-2 inside the

Following CM Punk’s popular run in the UFC, other celebrities

UFC lightweight champion Khabib Nurmagomedov leaped out of the octagon

Former WEC and Strikeforce champion Nick Diaz has faced off

UFC megastar Conor McGregor is back. With the former two-division